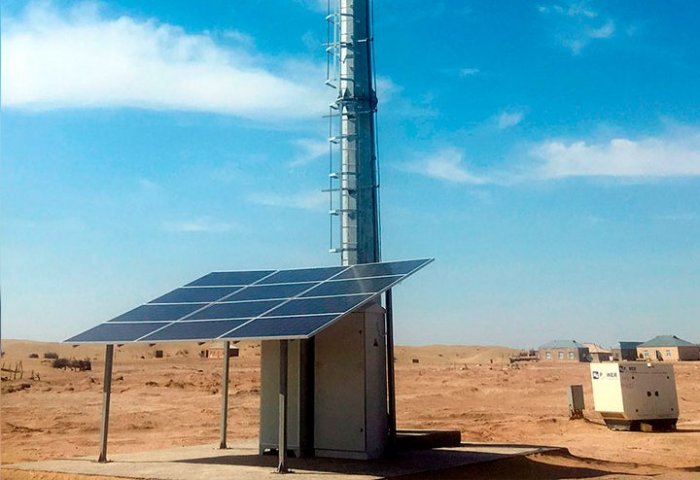 Solar-powered cellular base stations were installed in a number of remote villages in Turkmenistan’s Ahal velayat. Mobile communication services have now become available to residents of the Ak Bugday etrap’s Churchuri, Gujurly and Gyzylsakgal and Bokurdag villages, located 150 kilometers from the velayat center in a desert.

In the near future, the stations operating throug alternative energy sources will be installed in two more settlements of the etrap. New equipment and mast facilities will also be installed Kaka etrap’s Mehinli and Kyrkguyi villages.

In the desert regions of Karakum, specialists of Altyn Asyr CJSC, a state owned mobile operator in Turkmenistan, have already commissioned a number of base stations operating on electric energy generated by solar converters. The transmitting and receiving machinery equipped with such power generators was previously installed in the Ak Bugday etrap. Now it provides residents of Kukurtli, Bukury, Sakarchage and Sozenli villages with stable communication services.

Due to the growing demands of the population, the national mobile operator plans to significantly increase the level of provision of the population of remote areas with information and communication technologies.

Since the beginning of this year, 75 base stations with advanced capabilities have been installed in the villages of the Ahal, Mary and Lebap velayat’s. Specialists of Altyn Asyr CJSC plan to install 50 more sets of stations in rural areas by the end of the year, which, along with voice communications, will provide high-speed internet services.