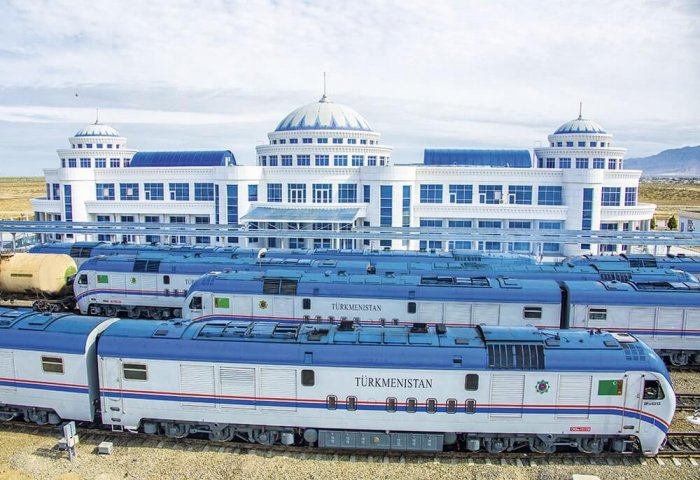 The parties noted the importance of the Akina-Andkhoy and Turgundi-Herat railways in boosting interstate trade and economic cooperation.

During the meeting, the sides exchanged views on cooperation in transport-transit sphere in the context of achieved agreements between the two countries. The parties particularly focused on the implementation of the projects of construction of Akina – Andhoy and Turgundy – Herat railroad lines.

The cost of the contract for the construction of the Akina-Andkhoy branch with a length of 30 km is $ 21 million. Demirýollary OJSC currently assembled more than 17 kilometers of rail sleepers for the structure of the railway track.

In the future, it is planned to extend the Akina-Andkhoy railway to the border with Tajikistan, from where access to the markets of the Asia-Pacific region opens. Thus, new prospects will open for boosting interstate trade and economic cooperation by joining the Lapis Lazuli Route Transport and Transit Corridor project, connecting Afghanistan, Turkmenistan, Azerbaijan, Georgia, and Turkey, according to the report.

The meeting participants also thoroughly discussed issues related to exploration, design and construction of the Turgundi-Herat railway and preparation of the projects feasibility study and financing.

These works are carried out in accordance with the Memorandum signed in June last year between the Türkmendemirýollary Agency and the Afghan Railway Authority.

The length of the new steel line will be 173 km. It is planned to build 4 railway stations, communication and warning systems, an apron and other relevant structures along the railway. Negotiations are underway with international financial institutions, including the Asian Development Bank and the Islamic Development Bank for the provision of long-term loans for the project.

Türkmendemirýoltaslama Institute has completed a project of a 6-kilometer section of the railway passing through the territory of Turkmenistan, from Serhetabat station to the Turkmen-Afghan border. In addition, the construction of a railway bridge with a length of about 177 m is envisaged along the railway.

Noting the importance of the Akina-Andkhoy and Turgundi-Herat railways, the parties expressed confidence that their role as important links of international transport corridor, which runs from Caspian Sea to Indian Ocean, would increase with connection of new logistic routes.