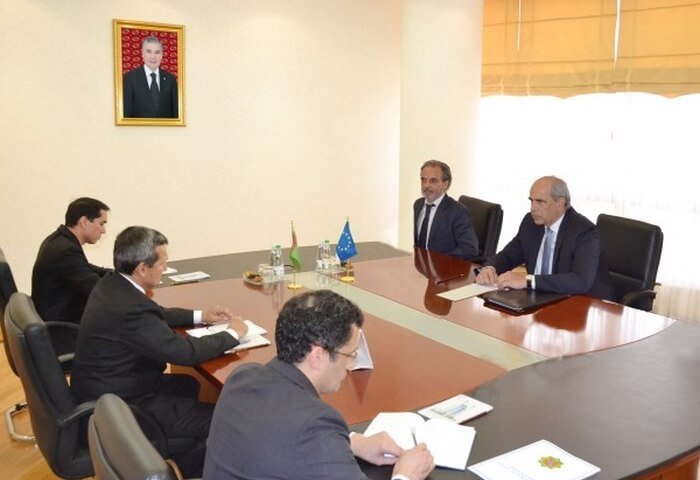 Deputy Chairman of the Cabinet of Ministers, Minister of Foreign Affairs of Turkmenistan Rashid Meredov and EU Special Representative for Central Asia Peter Burian during a meeting on Wednesday in Ashgabat reaffirmed their commitment to promoting the project on exporting Turkmen energy resources to European markets.

Rashid Meredov and Peter Burian, who arrived in Turkmen capital on a working visit, paid special attention to the implementation of the EU Strategy for Central Asia. In this regard, it was noted that Turkmenistan welcomes the EU's support in the implementation of regional transport and energy projects along the East-West route, including the Caspian Sea - Black Sea and the Lapis Lazuli transport corridors, the Foreign Ministry of Turkmenistan said in its Wednesday press release.

The parties also discussed the possibilities of expanding cooperation in the field of alternative energy.

During the meeting, the officials stressed the importance of humanitarian cooperation, including through the regular Turkmenistan-EU Dialogue on human rights and expressed interest of both sides in continuing the implementation of educational projects.

During his visit to Ashgabat, the EU Special Representative for Central Asia Peter Burian also held talks with the Deputy Chairman of the Cabinet of Ministers, Chairman of the Supreme Control Chamber of Turkmenistan Serdar Berdimuhamedov. The officials exchanged views on strengthening cooperation in the fields of security, energy, transport and environmental protection.

The sides discussed further expansion of trade and economic ties and cultural and humanitarian exchanges with the EU countries.

In connection with the active process of digitalization of key sectors of the national economy, the Turkmen side expressed interest in the know-how of European specialists in this field, according to the statement.

Within the framework of his visit, Peter Burian is scheduled to hold talks with a number of Turkmen government officials.