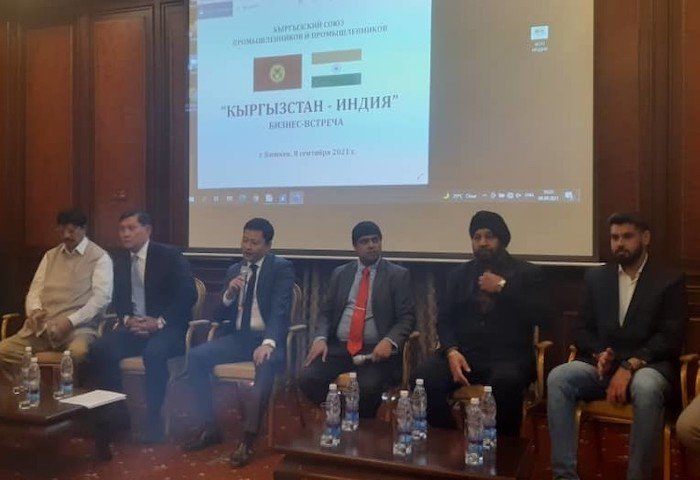 The KUIE President Danil Ibrayev noted that within a month the trade route will be ready for the pilot transportation of wagons. (Photo: Tazabek)

The new trade route will be established between India and Kyrgyzstan, the Bishkek-based Tazabek news outlet reported on Wednesday with reference to the statement by the President of the Kyrgyz Union of Industrialists and Entrepreneurs (KUIE) Danil Ibrayev during a meeting with the Indian business delegation in Bishkek.

Ibrayev said the KUIE held negotiations with railway operators in Iran, Turkmenistan and Uzbekistan in order to establish a trade route to India, adding that “we are now consolidating the efforts of the railways of Iran, Uzbekistan, Turkmenistan to Osh.”

The KUIE head noted that within a month the trade route will be ready for the pilot transportation of wagons "at tariffs that, in our opinion, will be competitive."

Ibrayev said the new trade route will pass through the Iranian port in Bandar Abbas. From the port, products from India could be transported by rail to the south of Kyrgyzstan and vice versa.

The route will pass 1,600 km through Iran’s territory and through Sarakhs to Turkmenistan, then via Uzbekistan to Osh in Kyrgyzstan, according to Danil Ibrayev.

The KUIE head said the total length of the trade route from Bandar Abbas port to the city of Osh will be 3,060 kilometers, and it will up to 10 days to transport freight through this route. The Head of the Indian business delegation Asif Iqbal, in turn, said the transportation of cargo via sea route from India to the port of Bandar Abbas takes 12 days.