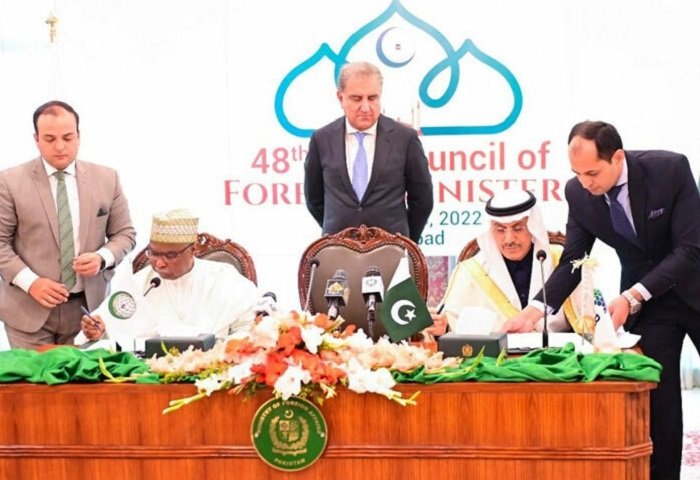 The OIC Secretary General and the head of the Islamic Development Bank Muhammad Sulaiman Al-Jasser signed a charter to establish a Humanitarian Trust Fund for Afghanistan.

The Organization of Islamic Cooperation (OIC) and Islamic Development Bank on Monday in Pakistan’s capital Islamabad signed a charter to establish a Humanitarian Trust Fund for Afghanistan to raise donations for the Afghan people that are facing poverty and hunger.

The document was signed by the OIC Secretary General Hissein Brahim Taha and the head of the Islamic Development Bank Muhammad Sulaiman Al-Jasser, the Pakistani Foreign Ministry said in its statement.

"The Trust Fund has been launched under the aegis of the Islamic Development Bank. Its establishment was one of the key outcomes of the 17th Extraordinary Session of the OIC Council of Foreign Ministers, held in Islamabad on December 19, 2021," said the statement.

The bank will serve as a means to channel humanitarian assistance to Afghanistan, including in partnership with other international actors.

Addressing the signing ceremony, Qureshi said that the dire humanitarian situation in Afghanistan needs urgent action and requested the OIC member-countries, Islamic Financial Institutions, donors and other international partners to make donations to the trust fund.

The signing of the document took place the day before the 48th OIC Council of Foreign Ministers meeting that will be held in Islamabad on Tuesday and Wednesday.

The 57-country OIC and the Islamic Development Bank are both headquartered in Saudi Arabia. Turkmenistan is member to both of the international institutions.