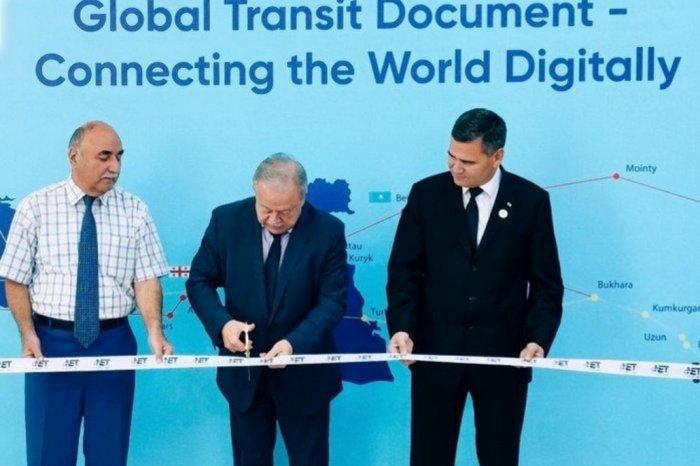 At the end of the official launching ceremony of the GTrD pilot project, the participants adopted a Joint Statement.

A solemn ceremony of launching the pilot project of the Global Transit Document (GTrD) was held on Wednesday in the Avaza National tourist zone located in the Turkmen coast of the Caspian Sea.

The launch ceremony was attended by Executive Secretary of International Center for Transport Diplomacy Igor Runov, Chairman of the Intergovernmental Council of Road Transport Workers of the Commonwealth of Independent States Buri Karimov as well as representatives of the regional countries – Kazakhstan, Tajikistan, Turkmenistan and Uzbekistan, the official Turkmen media reports.

The introduction of a digital platform of the GTrD-based global transit network will spread the customs guarantee and insurance regime, as well as provide traceability of goods and vehicles throughout the journey from the starting point to the destination.

At the end of the official launching ceremony of the GTrD pilot project, the participants adopted a Joint Statement in which they confirmed the readiness of the parties to further cooperate in promoting the proposal to create a global digital transit network at different levels, as well as within the framework of the United Nations.

Earlier a working group was created to develop a unified multimodal document aimed at maximizing the facilitation of international transit transport. It was composed of representatives of government agencies, customs authorities of member countries of the international transport corridor Europe-Caucasus-Asia (TRACECA), as well as observers, including the beneficiary of TRACECA program – Turkmenistan and TRACECA partner – the international organization UNESCAP.

Since 2020, there was an active refinement and preparation of the final version of the GTrD concept. The joint work on the preparation of pilot transportations began at the beginning of 2022.