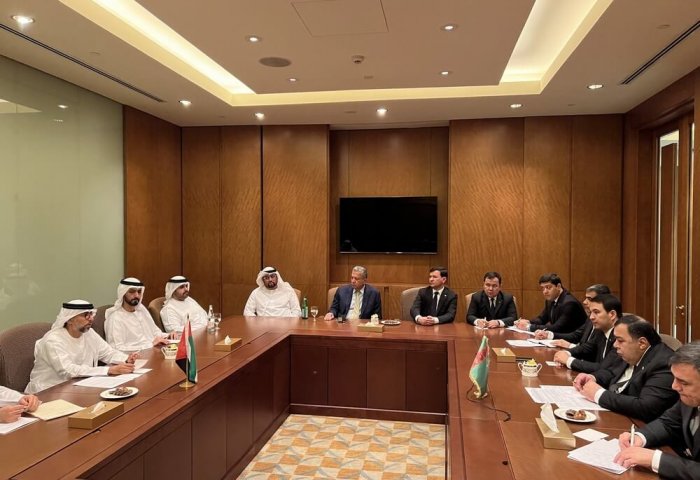 Turkmenistan and the UAE expressed interest in expanding the range of cooperation between public and private sectors and improving the investment climate.

Delegation of Turkmenistan led by Deputy Minister of Foreign Affairs Berdiniyaz Matiyev in a meeting with the State Minister of the United Arab Emirates (UAE) Ahmed Ali Al Sayegh in Abu-Dhabi discussed the organization of the upcoming official visit of President Serdar Berdimuhamedov to the UAE.

The Head of Turkmenistan was invited to visit the middle eastern country by the UAE President Sheikh Mohammed Bin Zayed Al Nahyan in July.

The visit of the Turkmen delegation to the UAE lasts from September 12 to 16, the Ministry of Foreign Affairs of Turkmenistan said in its Wednesday press release.

On the course of the meetings, the parties discussed preparation and holding of the next meeting of the Joint Committee on Cooperation between Turkmenistan and the UAE scheduled for 2022 in Abu Dhabi.

The sides also considered in detail issues of strengthening trade-economic relations between the two countries. Both countries expressed interest in expanding the range of cooperation between public and private sectors and improving the investment climate.

They also exchanged views on attracting and developing the transport potential of Turkmenistan and the UAE. They talked about the use of sea, rail and air transport and port infrastructure to promote bilateral and multilateral trade and economic relations.

During the visit, the Turkmen delegation will hold a number of additional meetings in the ministries and departments of the UAE.