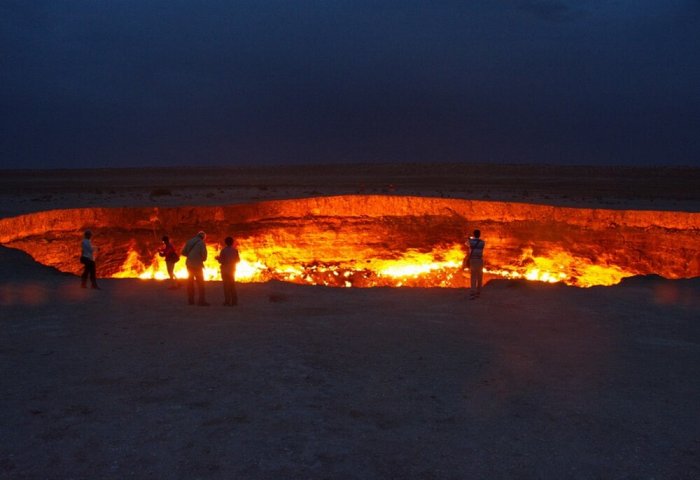 The Darvaza gas crater, which has been burning for half a century, is located in the central Garagum Desert, around 266 km from Ashgabat.

President of Turkmenistan Gurbanguly Berdimuhamedov during the online cabinet meeting on Friday instructed to find a solution to extinguish a fire in the Darvaza gas crater in Garagum Desert.

Addressing Deputy Chairman of Government Shahym Abdrakhmanov, overseeing the country's oil and gas industry, the Turkmen President stressed that for many years a huge amount of gas has been burning in the Darvaza region, and that this negatively affects both the environment and the health of people living nearby.

The Turkmen Leader focused on the loss of a large amount of natural raw materials that could be exported and would contribute to improving the well-being of the life of the Turkmen people. In this regard, President Berdimuhamedov instructed Abdrakhmanov to gather scientists and, if necessary, attract foreign consultants to find a solution to extinguish the fire.

The Darvaza gas crater, which has been burning for half a century, is located in the central Garagum Desert, around 266 km from Ashgabat. In 1971, Soviet geologists were drilling for oil in the desert when they hit a pocket of natural gas, which caused the earth to collapse. Geologists came to the decision to set it on fire to prevent methane emissions, thinking it would burn out in a short span of time. But the fire still continues to burn. The crater’s diameter is more than 60 meters, and its depth is 30 meters.