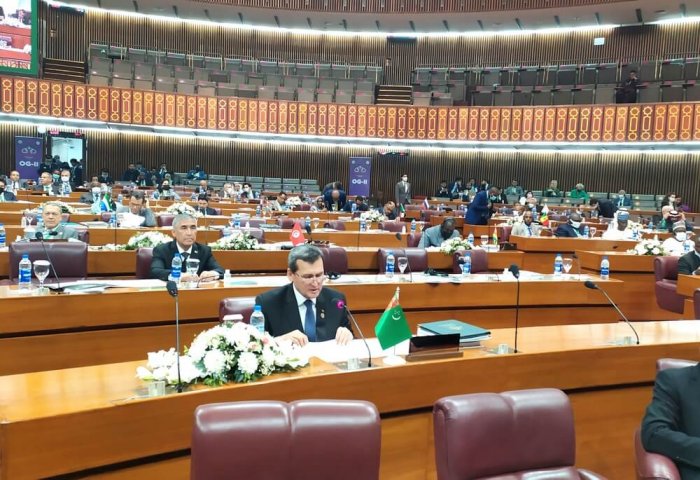 The delegation of Turkmenistan to the session was headed by Acting Minister of Foreign Affairs Rashid Meredov.

The 48th session of the Council of Foreign Ministers of the Organization of Islamic Cooperation (OIC) took place at the parliament building in Islamabad on March 22-23.

The delegation of Turkmenistan to the session was headed by Acting Deputy Chairman of the Cabinet of Ministers, Minister of Foreign Affairs of Turkmenistan Rashid Meredov, the Turkmen Foreign Ministry said in its press release.

The annual meeting of the heads of foreign policy departments of Islam countries was held under the motto “Building Partnerships for Unity, Justice, and Development”. At the beginning of the meeting, the chairmanship of the 48th session of the OIC Ministerial Council was transferred to Pakistan.

Prime Minister of Pakistan Imran Khan and the OIC Secretary General Hissein Brahim Taha spoke at the inaugural meeting. On behalf of the Regional Groups, the heads of delegations of Kazakhstan (Asian Group), Tunisia (Arab Group) and Nigeria (African Group) gave speeches at the meeting.

In his speech, Deputy Prime Minister of Kazakhstan, Foreign Minister Mukhtar Tleuberdi informed about the result of March 12 presidential elections in Turkmenistan, saying that according to international observers, they were held in a fair, free and competitive atmosphere. As a result of the elections, Serdar Berdimuhamedov became the new President of Turkmenistan, receiving 73% of the votes.

Rashid Meredov emphasized the importance of the policy of neutrality in establishing peace, stability and security, and in this context noted the significance of the resolution "The role of the policy of neutrality in maintaining and strengthening international peace, security and sustainable development in the OIC region and throughout the world".

Focusing on the issue of support for Afghanistan, Meredov said the position of Turkmenistan is based on the understanding of the unity of the political, economic and humanitarian aspects of the Afghan issue.

Noting the importance of interconnectedness as one of the factors of sustainable development, the head of the Turkmen delegation focused on the need for further development of partnership in the field of international transport.

In this regard, the forum participants were briefed about the Conference of Ministers of Transport of Landlocked Developing Countries, which will be organized by the United Nations in cooperation with the Government of Turkmenistan in August 2022 in Turkmenistan.