Chairman of OTS Council of Elders Holds Talks in Turkmenistan 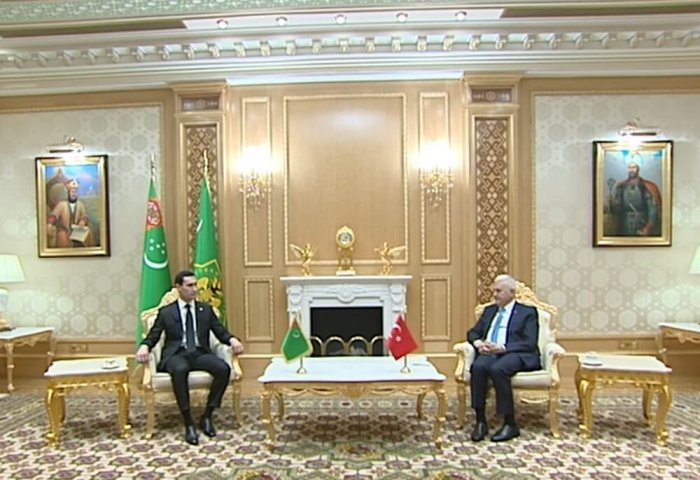 President Serdar Berdimuhamedov emphasized that deepening cooperation with fraternal Turkic-speaking countries, including Turkey, is one of priorities of Turkmenistan's foreign policy.

During the meeting with the Head of State, Binali Yildirim expressed gratitude for the opportunity of a personal meeting and conveyed greetings from Turkish President Recep Tayyip Erdogan. He congratulated the Head of Turkmenistan on his victory in the March 12 presidential elections and on inauguration.

Thanking the Head of the OTS Council of Elders for the kind words, President Serdar Berdimuhamedov conveyed his best wishes to his Turkish counterpart, emphasizing that deepening cooperation with fraternal Turkic-speaking countries, including Turkey, is one of priorities of Turkmenistan's foreign policy.

President Berdimuhamedov said Turkmenistan attaches particular importance to the development of traditionally friendly bilateral relations, seeing Turkey as a sincere friend and reliable partner in resolving many topical issues of regional and international politics. He noted with satisfaction the fruitfulness of the established cooperation in the political-diplomatic, trade-economic, and cultural-humanitarian spheres.

In conclusion, after exchanging mutual congratulations on the anniversary date celebrated this year – the 30th anniversary of the establishment of diplomatic relations between Turkmenistan and Turkey, President Serdar Berdimuhamedov and Chairman of the OTS Council of Elders expressed mutual confidence in the steady strengthening of traditional relations of friendship and brotherhood between the countries.

During the meeting with the Chairman of the Halk Maslakhaty Gurbanguly Berdimuhamedov, it was stated that the peoples of the Turkic states and the Turkmen people have historical roots that go back thousands of years, a common spiritual and cultural values. All this is a reliable foundation for expanding and strengthening the constructive interaction between Turkmenistan and the Turkic-speaking countries in the political-diplomatic, trade-economic and cultural-humanitarian fields.

Gurbanguly Berdimuhamedov said the active and effective participation in the activities of the OTS, including in the Council of Elders, is defined as an important direction.

At the meeting, the Chairman of the Halk Maslakhaty emphasized that Turkmenistan is interested in the comprehensive development of inter-parliamentary relations with the Turkic-speaking states, as well as in active participation in the activities of specialized structures operating in this area.

Turkmenistan joined the Organization of Turkic States as an observer in November last year.