Ferry Service Expected to Launch Between Ports of Turkmenbashi, Astrakhan 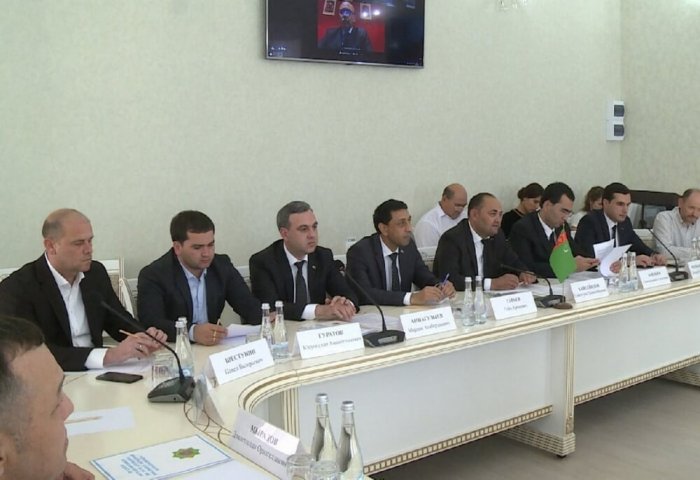 The Head of the Turkmenbashi port Seyitguly Bayseyidov said during the meeting that Turkmen businesses will be interested to learn about the details. (Photo: GTRK Lotos)

The delegation of the Agency for Transport and Communications under the Turkmen Cabinet of Ministers on Wednesday in Russia’s Astrakhan Oblast discussed the launch of car ferry services from Turkmenbashi port to the oblast and the establishment of a logistics center of Turkmenistan in the Russian coastal region, the GTRK Lotos news TV channel reports.

According to the report, the annual trade turnover between Astrakhan Oblast and Turkmenistan today is about $200 million. The sides have great potential for cooperation, including in the sphere of cargo transit. Cooperation in railway, road and air transport is developing actively. Turkmenistan's joining the North-South transport corridor and establishment of the automobile ferry line between the ports of Olya and Turkmenbashi will increase the cargo turnover of all Caspian littoral states.

"There are no such professional warehouses on the Caspian coast of the Russian Federation. This is the first experience where we will work seriously, systematically with our neighboring countries. And we are very much counting on this interaction with the Turkmen side,” the Director General of the Lotos Special Economic Zone of Astrakhan Sergey Milushkin said.

The Head of the Turkmenbashi port Seyitguly Bayseyidov said during the meeting that Turkmen businesses “will also be interested to learn about the details, especially what the conditions are in the legislative, economic sense. It is interesting to learn about the terms of the contract and investment. They will have to study it all in detail."

The Vice-Premier and Foreign Minister of Turkmenistan Rashid Meredov during a press briefing last week informed that Turkmenistan will join the North-South transport corridor established by Russia, Iran and India.