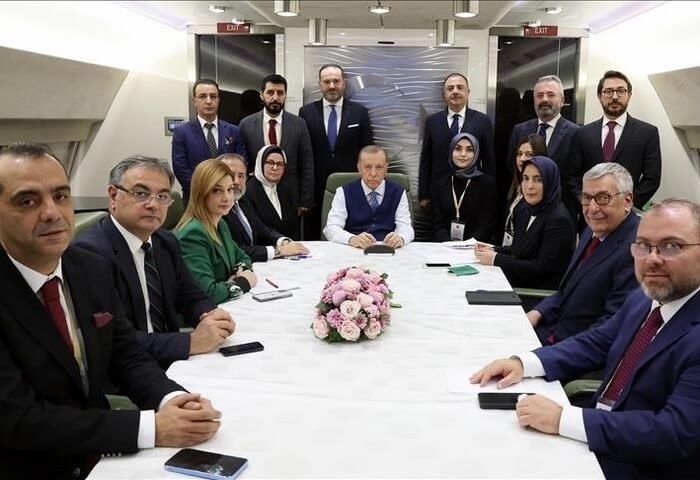 According to the Turkish Leader, Türkiye will become an important hub on the route of Turkmen gas supplies to Europe. (Photo: AA)

President of Turkmenistan Serdar Berdimuhamedov will visit Türkiye in early 2023, Turkish President Recep Tayyip Erdogan said on Thursday during an interview with Turkish journalists on his return from Turkmenistan. Erdogan added that he hopes during the visit, the issue of export of Turkmen gas to Europe will be resolved, the Anadolu Agency reports.

In Turkmenistan on Wednesday, Erdogan participated in first summit of the Heads of State of Turkmenistan, Azerbaijan and Türkiye,

The topic of gas exports from Turkmenistan across the Caspian Sea is being currently discussed between Baku and Ashgabat, Erdogan stated. He informed that at the trilateral summit in Turkmenistan’s Avaza national tourist zone, it was decided to organize a meeting of energy ministers of Türkiye, Azerbaijan and Turkmenistan to discuss in detail ways of cooperation in this area.

"I instructed the Turkish Energy Minister to reach the result of discussions with colleagues from Azerbaijan and Turkmenistan within a month. Based on the results of these decisions, we will discuss this topic again. In early 2023, the President of Turkmenistan intends to make an official visit to Türkiye. I hope that it is then that we will put an end to this issue," Erdogan said.

Erdogan also informed that the Trans-Anatolian Gas Pipeline (TANAP) that transports the Azerbaijani gas from the Shah Deniz field to Türkiye has already reached its design capacity of 32 billion cubic metres. He added that the Trans Adriatic Pipeline (TAP) that transports gas from Türkiye to Europe through Greece is also at its limit of six billion cubic metres.

“Therefore, now our colleagues will work on whether to establish a new pipeline or not so that steps can be taken accordingly,” Erdogan said.

Following the trilateral summit, the Turkish Foreign Minister Mevlut Cavusoglu in a joint press conference with his Turkmen and Azerbaijani counterparts informed that the countries will set up a working group on the issue of transporting Turkmen gas to other markets.