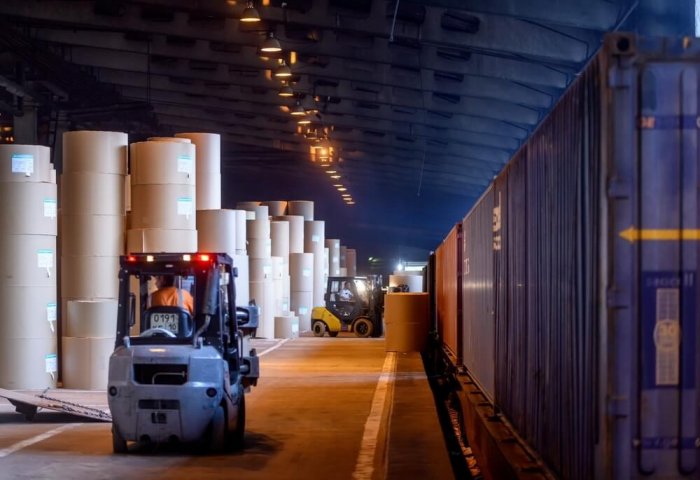 The train set off from the Nigozero station of the Oktyabrskaya Railway. (Photo: RZD Logistics)

RZD Logistics, a subsidiary of the Russian Railways (RZD), organized a shipment of a full container train with paper products from the Republic of Karelia to India along the eastern branch of the North-South International Transport Corridor, RZD Logistics announced on Wednesday.

The train set off from the Nigozero station of the Oktyabrskaya Railway and will follow the eastern branch of the North-South transport corridor via Kazakhstan, Turkmenistan, Iran to the port of Chennai in India.

The consignment of one type of products was formed on this route for the first time in 2022. 32 80-foot platforms owned by the container operator Russian Railways Business Asset were provided for the transportation of 53 40-foot containers with newsprint.

According to Andrei Kochkin, the Deputy Head of the International Transportation Department of Russian Railways Business Asset JSC, negotiations are underway within the framework of the project to increase shipments on the eastern route via Turkmenistan’s Sarakhs to India and Iran.

Last week, RZD announced that it and its partners from Kazakhstan, Turkmenistan and Iran decided to set unified reduced rates for next year for the transportation of containers along the eastern branch of the North-South ITC.

According to preliminary estimates, by 2025 the total volume of export shipments from Russia on the eastern branch of the North-South corridor may reach more than 5 million tons a year.