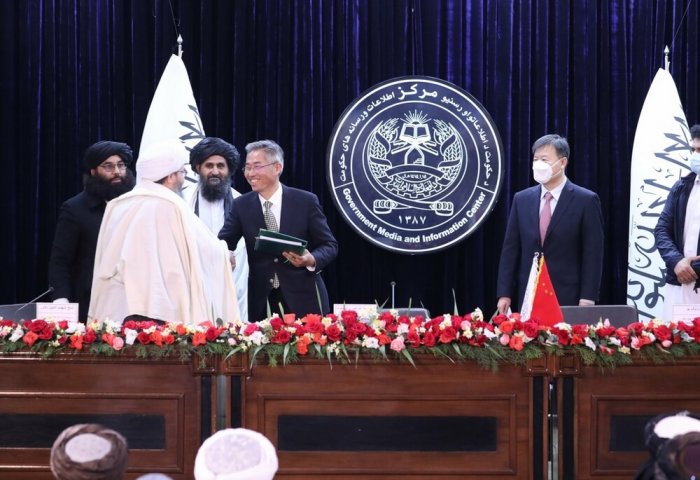 The contract was signed at a ceremony with the participation of senior members of Afghanistan's interim government and the Chinese ambassador in Kabul Wang Yi. (Photo: Photo: Afghan Government Media and Information Center)

The interim government of Afghanistan and the Chinese oil and gas company Xinjiang Central Asia Petroleum and Gas Co (CAPEIC) signed a contract in Kabul last Thursday for oil production in the Amu Darya River basin in the north of the country, the TOLOnews television network reports.

The contract was signed at a ceremony with the participation of senior members of Afghanistan's interim government and the Chinese ambassador in Kabul Wang Yi.

Speaking at the ceremony, Acting Minister of Mines and Petroleum of Afghanistan Shahabuddin Delawar said under the deal the Chinese company will be extracting oil from an area covering 4,500 square kilometres (1,737 square miles) collectively in northern Sar-e Pul, Jawzjan, and Faryab provinces.

Daily oil output will start at 200 tons and gradually rise to 1,000 tons. The amount of oil in these areas is estimated at 87 million barrels.

The extracted oil and petroleum products are expected to be refined in Afghanistan. Under the terms of the contract, the Chinese company will invest $150 million in the first year, and over three years the volume of investments will reach $540 million.

The Afghan government will get a 20 percent share in the project, which can be increased to 75 percent in the coming years. The project will also provide jobs to at least 3,000 people in the country.