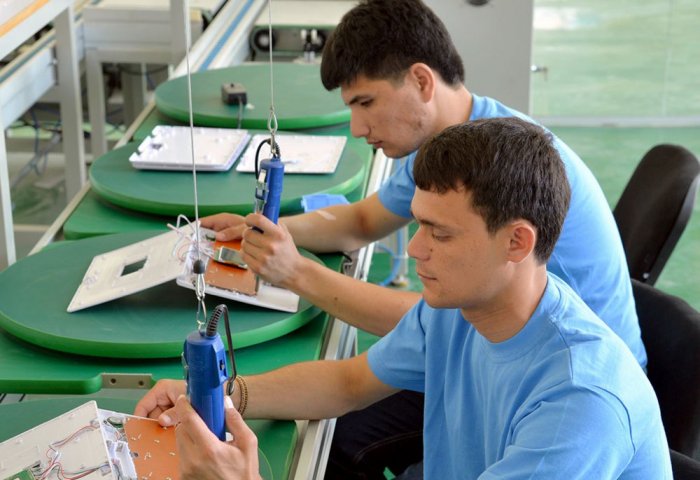 The company will assemble more than 70 thousand units of “electronic assistants” for the first-graders of Turkmenistan.

Another Turkmen enterprise Agzybirlik tilsimaty of the Computer Technologies Center of the Ministry of Trade and Foreign Economic Relations of Turkmenistan is assembling another batch of the same educational devices in the amount of 80 thousand units. The enterprises will cover the needs of the country's compulsory schools, which are preparing to meet the demands of 153,885 first-time “schoolgoers”.

The tradition of giving first-graders educational computers belongs to President Gurbanguly Berdimuhamedov. Each year on September 1 every first-grader receives such a unique “electronic assistant” for the upcoming school life as a gift on behalf of the Head of state. Before the establishment of computer assembly line in Turkmenistan, such equipment was purchased abroad. It demonstrates the successful promotion of reforms related to the field of import substitution and the dynamic development of the domestic electronic industry.

Besides the assembly of educational computers, Aýdyň gijeler has at its disposal three more workshops  on thermoplastic automation, the production of energy-saving LED incandescent lamps of different capacities, as well as small-sized LED suspended ceilings in sizes 60 by 60, 30 by 30 and 30 by 40 centimeters.

Aýdyň gijeler enterprise is mainly focused on the successful implementation of the State Program for the Development of the Electronic Industry. For this purpose, the enterprise timely established close partnership with the now abolished Turkmen State Institute of Transport and Communications, whose successor is the Institute of Telecommunications and Informatics of Turkmenistan. Together with this institute, relevant projects are being carried out, designed to embed scientific developments of the school’s Council of Young Scientists into production. Among them are the production of IP tuners, electronic scales, calculators, and compact flashlights. In addition to domestic IP tuners, two types of flat-screen TVs in sizes 32 and 55 centimeters are currently being developed.

For the successful implementation of this joint project, a delegation consisting of representatives of the Aýdyň gijeler and the Institute of Telecommunications and Informatics of Turkmenistan, in mid-August, plans a business trip to meet with their Chinese partners to organize the supply of necessary components for the production of a series of domestic TVs in Turkmenistan.