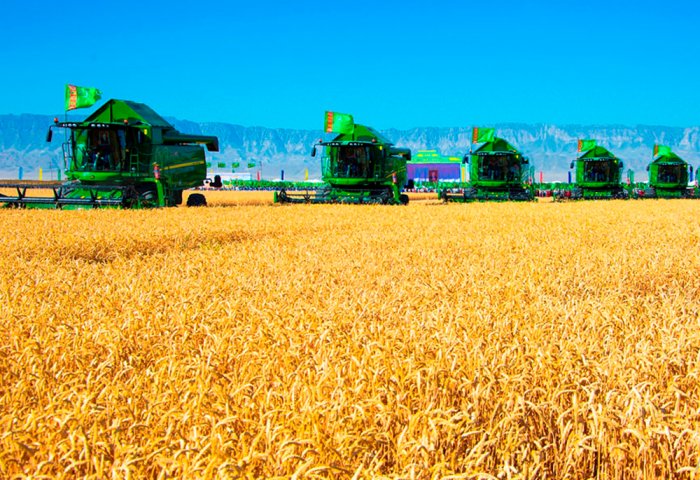 The yield of the Rovachlyk variety, while tested over the past three years, averaged 65.7 c/ha, exceeding the standard Sahrai variety by 13.2 c/ha.

Agricultural Research and Production Center of the Turkmen Agricultural Institute of Dashoguz continues its successful comprehensive breeding work to create new varieties of wheat. It’s an accepted fact that only local varieties and seed reproduction methods are capable of producing high and stable yields. The key areas of this work are: increasing productivity, grain quality, disease resistance, drought and heat resistance, resistance to cold winter and lodging.

According to the Turkmenistan: the Golden Age, in 2019, the center’s breeders created two varieties of soft winter wheat, Rovachlyk and Galkynysh, for the cultivation in all regions of Turkmenistan. The growing season of wheat varieties is 200-210 days, the protein content is 13-15 percent, gluten is 32-34%, and the glassiness is 65-70%. Tests have shown that the new varieties are resistant to plant diseases like brown and yellow rust, as well as powdery mildew.

The yield of the Rovachlyk variety, while tested over the past three years, averaged 65.7 c/ha, exceeding the standard Sahrai variety by 13.2 c/ha. The highest yield was in 2017 - 69.2 c/ha.

The yield of the Galkynysh variety, averaged over several years, is 60.0 c/ha; under favorable conditions, it can be even higher. The maximum yield was achieved this year - 70.1 c/ha.

These are decent indicators for the soil and climatic conditions of Turkmenistan.

New varieties were transferred to the State Service for Seed Production and Variety Testing of Turkmenistan for testing.

Turkmenistan plans to reduce the size of land for wheat cultivation in 2020. The corresponding Decree was signed on Monday by President Gurbanguly Berdimuhamedov, ordering the Ministry of Agriculture and Environmental Protection to sow wheat at established area for the harvest of 2020 in Turkmenistan, on the basis of contracts with tenants, land users and landowners together with the governors of the velayat.

While singing the Decree on production of wheat in Turkmenistan in 2020, during video conference session, the Head of the State noted that taking into account the provision of the food security of Turkmenistan, the size of the lands for wheat will be reduced. Taking into consideration the adopted programs to increase the volume of exports and for the industrial development of Turkmenistan, the lands after winter harvest would be allocated for cotton.