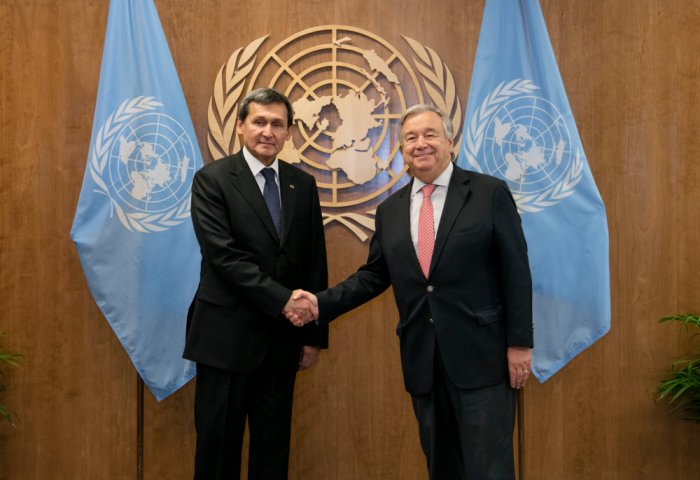 Minister of Foreign Affairs of Turkmenistan Rashid Meredov held a meeting with the United Nations Secretary-General Antonio Guterres on the sidelines of the 74th session of the UN General Assembly in New-York on September 30.

According to the press release issued by Ministry of Foreign Affairs of Turkmenistan, in the beginning of the meeting, Turkmen side conveyed warm greetings on behalf of the President of Turkmenistan.

During the constructive talks, the parties touched upon a wide range issues of cooperation.

The UN secretary general noted with satisfaction the efforts of Turkmenistan to ensure peace and stability in the region.

That day the Foreign Minister had also met with the UN Under-Secretary-General for Economic and Social Affairs Liu Zhenmin.

The High Representative welcomed the proposal on holding the International Conference of the Transport Ministers of the Landlocked Developing Countries in 2020 which will become one of the main stages of the advancement of the Ashgabat Process that was laid down during the First Global UN Conference on transport held in Ashgabat in 2016.

At the meeting, the parties noted the active role of the UN Regional Center of Preventive Diplomacy for Central Asia, as well as the underlined the new initiatives of the Center on maintaining stability, security and development in the Central Asian region.

He also had a meeting with the Under-Secretary-General of the United Nations, Head of Counter-Terrorism Office Vladimir Voronkov.

The parties discussed the variety of issues related to the development of multilateral partnership between the UN member-states aimed at the establishment of effective mechanisms to enable the efficient fulfilling of the obligations in countering international terrorism, extremism and other threats.

The Minister of Foreign Affairs of Turkmenistan signed the Code of Conduct for achieving the World Free of Terrorism at the UN headquarters on September 30.

The accession of Turkmenistan to the international act was another confirmation of the Central Asian country's strict commitment to fulfilling the obligations arising from multilateral documents in the field of combating terrorism.