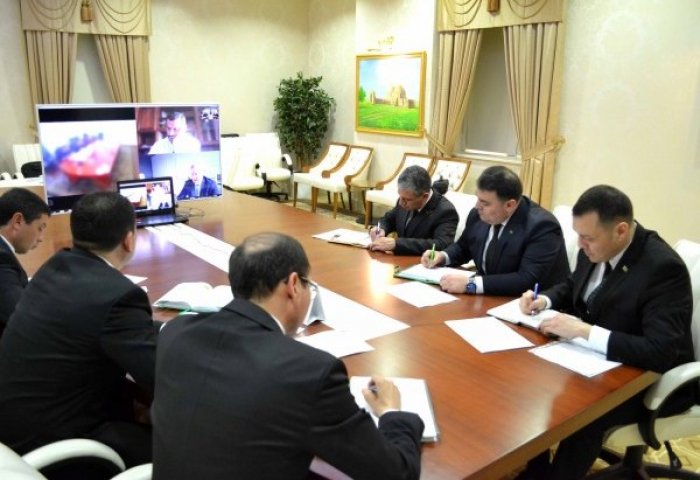 During the video conference meetings, the sides discussed the implementation of the reached agreements.

Representatives of Turkmen transport agencies held a video conference meetings with their partners in Tatarstan.

During the talks between the representatives of the Türkmenhowaýollary (Turkmenistan Airlines) Agency and the Kazan Helicopter Plant Joint Stock Company, the parties exchanged views on the implementation of the reached agreements and the prospects for cooperation.

The sides focused on the acquisition of medical and other helicopters, as well as spare parts, consumables and necessary equipment produced by the Kazan Helicopter Plant.

The parties also discussed the training of flight and engineering personnel.

The representatives of various institutions of Turkmenistan attended a video conference session between the Türkmenawtoulaglary (Turkmen Motor Transport) Agency and the KAMAZ Joint Stock Company.

During the session, the parties considered the current state of affairs and prospects of development of mutually beneficial cooperation, discussed the implementation of the Agreement on cooperation for the delivery of Kamaz vehicles and their future provision of services.

The company representatives said the country represents one of key markets for KAMAZ and noted that the company will continue to take the most responsible approach to fulfilling its partnership obligations, including the construction of service centers, and further improving the skills of personnel serving the modern equipment.

A video conference meeting was also held at the Turkmenbashi International Seaport.

The representatives of the Türkmendeňizderýaýollary (Turkmenseariverways) Agency, heads and specialists of the Turkmenbashi International Seaport, Balkan shipbuilding and constructing factory OJSC, the Deputy Prime Minister – Minister of Industry and Trade of Tatarstan, heads and representatives of Ak Bars shipbuilding corporation and Zelenodolsk plant named after A.M.Gorkiy OJSC attended the video conference session.

During the session, the Tatar side was informed about the interest in the potential projects of constructing the dry cargo ships.

The parties also discussed the financing of shipbuilding projects.