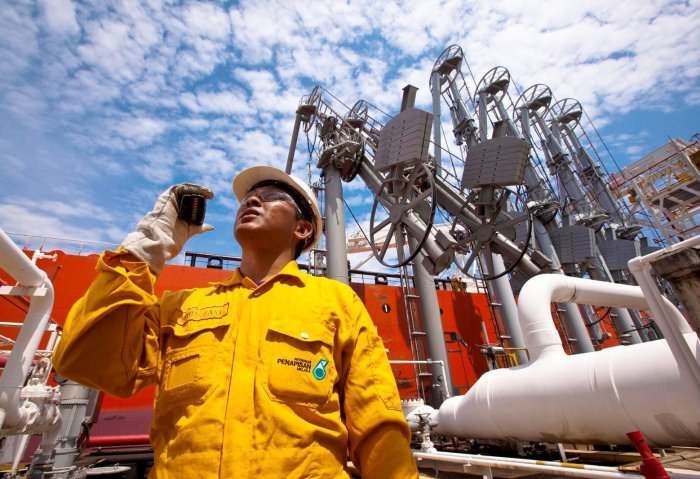 The Malaysian company Petronas Carigali (Turkmenistan) actively operates at the Turkmen sector of the Caspian Sea.

Active attraction of foreign investment and experienced foreign companies in the oil and gas sector of Turkmenistan is among the key tasks.

According to the TDH report on Friday, Turkmenistan possesses significant hydrocarbon reserves. In this regard, the idea of​​integrating the energy markets of Europe and Asia is being consistently promoted to ensure broad access to energy resources.

Since the commissioning of the Turkmenistan-China transnational gas pipeline in December 2009, billions of cubic meters of high-quality natural gas have been exported to China annually from fields operated primarily by the Türkmengaz (Turkmen Gas) State Concern.

Another source of raw materials for the pipeline is the deposits of the Bagtyyarlyk contract area, the exploration, construction and development of which under the terms of the Production Sharing Agreement is carried out by the China National Petroleum Corporation (CNPC). By the beginning of 2020, the CNPC's investments in this project amounted to more than $8.2 billion.

Last October, the European Commission included the Trans-Caspian pipeline in the list of priority energy projects of the European Union.

Turkmenistan presently supplies gas to the Russian Federation via the Central Asia-Center gas pipeline within the framework of a five-year contract concluded with Gazprom.

One of the most ambitious projects aimed at strengthening the raw material base of the industry is the industrial development of the world's largest onshore gas field - Galkynysh.

An agreement was signed with the Japanese company Mitsubishi Corporation for the preliminary technical design of a plant for the production of 10 billion cubic meters of commercial gas per year, which is planned to be built as part of the next stage of the development of Galkynysh. Earlier, three gas processing complexes with a total capacity of 30 billion cubic meters of natural gas were put into operation at the field.

At the end of 2018, an additional agreement was concluded with the TATNEFT Public Joint Stock Company of the Republic of Tatarstan for the provision of services for the overhaul of 88 wells at the Goturdepe field,

In May this year, Türkmengaz State Concern was authorized to conclude a contract with the Turkmen Petroleum Products Trade DMCC company, registered in the United Arab Emirates, for the provision of services to increase the level of natural gas production at 30 wells of the Dovletabat gas field.

The construction of a gas compressor unit with an annual capacity of 2 billion cubic meters is underway at the Zäkli Derweze gas treatment facilities serving a group of gas condensate fields in the Central Karakum Desert. The project, which is being implemented by the Türkmengaz together with the Singapore-based GP Global Equipment Pte Ltd, is scheduled to be completed in 2022.

In addition, international tenders are organized to select contractors for the turnkey construction of a new gas dehydration unit at the Deryalyk production site, the supply of equipment and the modernization of the 1st and 2nd technological lines of the Bagaja gas processing complex.

Great prospects are associated with the fields of the Turkmen sector of the Caspian Sea as experts estimate their reserves at 12.1 billion tons of oil and condensate, and 6.1 trillion cubic meters of natural gas.

Today, the Malaysian company Petronas Carigali (Turkmenistan) operates here, which carries out exploration and production of hydrocarbons in the Block-I contract area. A complex of seismic surveys has been carried out at the contract area, several dozen exploration, appraisal and production wells have been drilled. The company actively operates Mahtumkuli and Diyarbekir fields rich in resources.

A gas processing plant and an onshore gas terminal were commissioned nearby the town of Kiyanly. The total investment in the project by the beginning of 2020 amounted to around $11 billion.

In turn, Dragon Oil (Turkmenistan) Ltd, a subsidiary of Dragon oil (UAE), develops the Jeitun and Jygalybek fields, which are part of the Cheleken contract territory. A large amount of work has also been carried out to modernize and develop the offshore oil and gas infrastructure. A total of $7 billion have already been allocated for these purposes.

In addition, there are Production Sharing Agreements for a number of offshore blocks with Buried Hill (Cyprus) and ARETI with headquarters in Geneva, Switzerland.

The Italian company Eni has been operating in the Caspian region for many years. The company actively operates at the Nebitdag contract area. The main hydrocarbon reserves are concentrated in the Burun field. The company's investments amount to approximately $2.2 billion.

Fruitful cooperation has been established with Mitro International (British Virgin Islands), which, together with Turkmen partners, participates in the development of the East Cheleken field as part of the Hazar consortium. The North Goturdepe field is indicated as an example confirming the prospects of the Caspian coastal zone. At the field, as a result of exploration work, highly productive oil reservoirs were discovered, lying at a depth of more than 4 thousand meters.

Within the framework of the investment project, implemented by the Türkmengaz State Concern together with the Singapore-based Yug-Neftegaz, it is planned to build 60 exploration and production wells. Drilling of two of them was completed in the spring of this year, and industrial oil flows were obtained in the process of testing.

Currently, four more wells are being constructed in the shallow waters of the Caspian sea. Their drilling points were selected after additional 3D seismic surveys carried out at the North Goturdepe field.

An international tender has been announced for the design and supply of equipment for the separation, preparation and collection of condensate at the Uzynada field. Earlier, four wells were drilled at the field with a depth of more than 7 thousand meters, where industrial flows of natural gas and oil condensate mixture were obtained. Such wells were built for the first time in the history of the oil and gas sector of Turkmenistan and are the deepest in Central Asia today.