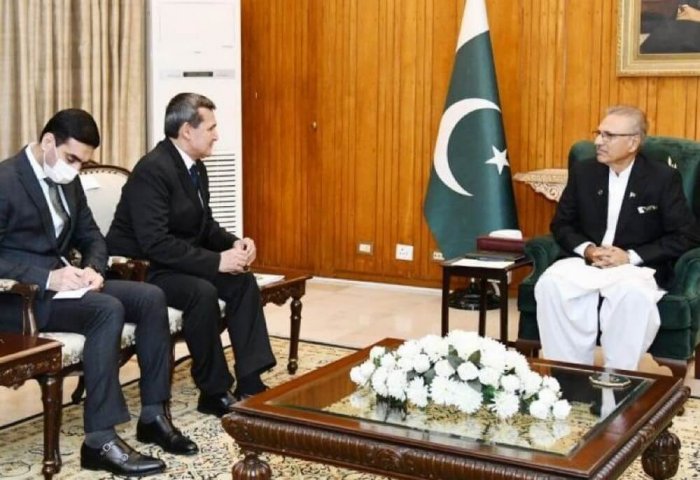 President of Pakistan Arif Alvi held a meeting with Turkmen Foreign Minister Rashid Meredov in Islamabad on Monday. The meeting proposed to establish a committee under the Joint Working Group to expedite the completion of Turkmenistan-Afghanistan-Pakistan-India (TAPI) pipeline.

President Alvi said Pakistan is committed to early completion of TAPI pipeline project, the Ministry of Information and Broadcasting said in its press release.

The meeting was held on the sidelines of the extraordinary meeting on humanitarian situation in Afghanistan of the Council of Foreign Ministers of the Organization of Islamic Cooperation.

The Turkmen Foreign Ministry stated in its statement that the sides are making significant efforts to further develop effective Turkmen-Pakistani cooperation, the strategic basis of which is a partnership in the energy sector.

Meredov said the dialogue between the two countries at the highest level creates a solid foundation for strengthening and further expanding bilateral relations.

The consistent development of Turkmen-Pakistani cooperation was also highlighted with satisfaction during the talks.

The Deputy Chairman of the Cabinet of Ministers, Minister of Foreign Affairs of Turkmenistan Rashid Meredov also held a meeting Foreign Minister of Pakistan Shah Mahmood Qureshi on Saturday. During the meeting, Qureshi reaffirmed Pakistan’s commitment for timely completion of energy projects.