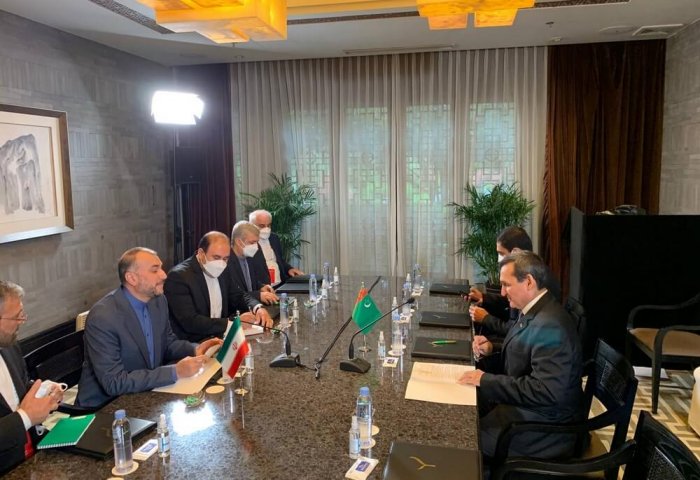 The meetings were held on the sidelines of the third meeting of Foreign Ministers of the Neighboring Countries of Afghanistan in China’s Tunxi city. (Photo: Iranian Foreign Ministry)

The heads of the foreign policy agencies of Turkmenistan and China in a meeting discussed a wide range of issues related to the implementation of bilateral agreements reached during contacts at the highest state level in 2021-2022, the Turkmen Foreign Ministry said in its press release.

The sides said this meeting is a good opportunity to exchange views on the current state of the strategic Turkmen-Chinese relations. The ministers stressed that the Committee for Cooperation between Turkmenistan and China, which works in four main areas – trade, energy, security and culture – is an effective mechanism for interstate interaction.

Rashid Meredov and the head of the Iranian Foreign Ministry Hossein Amir Abdollahian in a meeting exchanged views on the current state of trade-economic relations between the two states and the prospects for their development.

The sides paid particular focus to the possibilities increasing bilateral trade, interaction in the energy sector, and intensification of partnership in transport field.

The gathering in China is the third such meeting among Afghanistan's neighbors, since the developments in the country in August last year. Islamabad initiated and hosted the first such meeting in September. Tehran hosted the second foreign ministers' meeting of Afghan neighboring countries in late October.