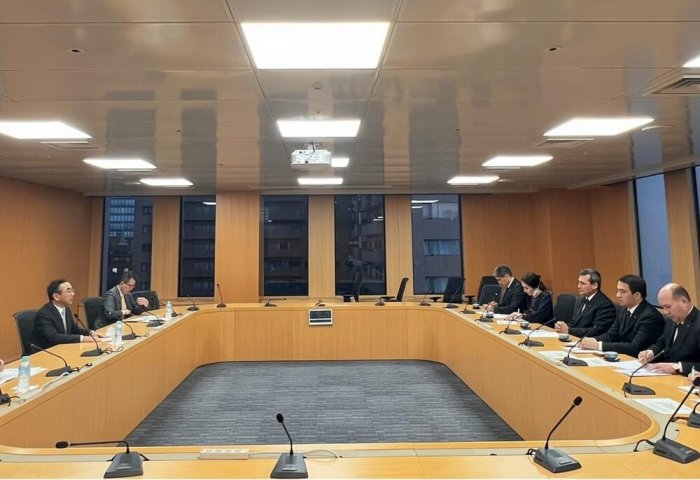 The meeting took place within the framework Turkmen delegation’s visit to Japan’s capital Tokyo on December 21-24.

Minister of Foreign Affairs of Turkmenistan Rashid Meredov held a meeting with Nobuhiko Sasaki, CEO and Chairman of Japan External Trade Development Organization (JETRO) on Wednesday in Japan, where the Turkmen side proposed to explore the possibility of opening a JETRO office in Turkmenistan to attract small and medium-sized Japanese companies to do business in Turkmenistan and, accordingly, Turkmen businesses to carry out projects in Japan.

The meeting took place within the framework Turkmen delegation’s visit to Japan’s capital Tokyo on December 21-24.

At the beginning of the meeting, the Head of the Turkmen delegation Rashid Meredov stressed the importance of initiatives by Gurbanguly Berdimuhamedov, the Chairman of Halk Maslakhaty chamber of the country’s bicameral parliament Milli Gengesh, launched during his visit to Japan in September 2022, the Foreign Ministry of Turkmenistan said in its press release on the meeting

The Turkmen side also proposed to assist in opening a trading house of Turkmenistan in Japan to attract Japanese companies to export high value-added products from Turkmenistan and to consider organizing a Japanese trade mission to Turkmenistan.

The JETRO director general confirmed his desire to build up mutually beneficial cooperation with Turkmenistan and expressed his readiness to take an active part in projects in different fields in Turkmenistan.

Within the framework of the visit, the Turkmen delegation will take part in the 14th joint meeting of the Japan-Turkmen and Turkmen-Japan committees on economic cooperation, the Foreign Minister will participate in the 9th meeting of foreign ministers of the dialogue Central Asia + Japan and meetings in the government, parliament, relevant ministries and departments of Japan.