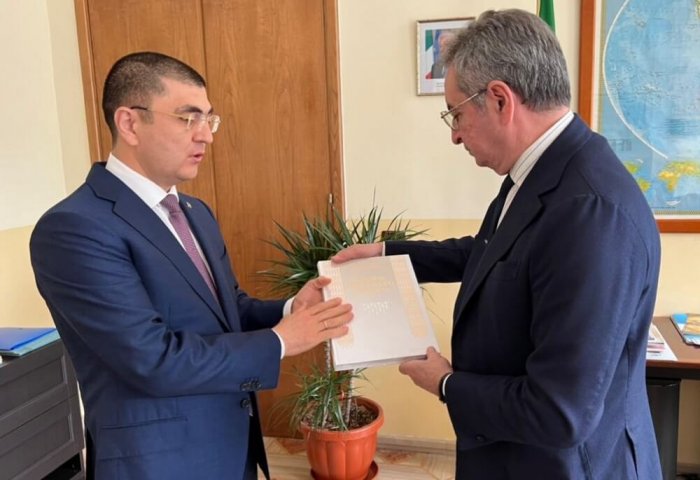 In the course of the dialogue with the port authority, the sides focused on establishment of cooperation between Turkmenbashi International Seaport and Italian seaports.

Ambassador of Turkmenistan to Italy Toyly Komekov on Monday held a series of meetings in Naples in order to establish cooperation with the city administration and local institutions in areas ranging from trade and economy to humanitarian sphere.

Within the framework of the visit, the Turkmen envoy held separate meetings with the Mayor of Naples, the President of the Directorate of Port Network Authority of the Central Tyrrhenian Sea, which covers the ports of Naples, Salerno and Castellammare di Stabia, the Vice President for Internationalization of the Union of Industrialists of Naples, as well as with the Rector of the University of Naples Federico II, according to the press release of the Turkmen Embassy in Italy.

The parties discussed the prospects for establishing business relations between the business communities of the two countries and the possibilities for leading companies of Naples to participate in projects involving the transfer of experience and modern technologies in the industrial, textile and agricultural processing sectors.

During the meeting with the Vice President of the Union of Industrialists of Naples, the Turkmen Ambassador informed about the model of economic development and business opportunities of Turkmenistan, as well as major projects in areas of interest to the Turkmen side.

The talks with the port authority focused on establishment of cooperation between Turkmenbashi International Seaport and the Italian seaports. At the University of Naples, the sides considered development of relations in terms of scientific and educational exchange, holding various joint events and conferences in the future.

Naples ranks fourth among the cities in Italy in economic power, and its port with a total cargo turnover of more than 30 million tons per year is one of the busiest ports in the Mediterranean Sea and Europe.