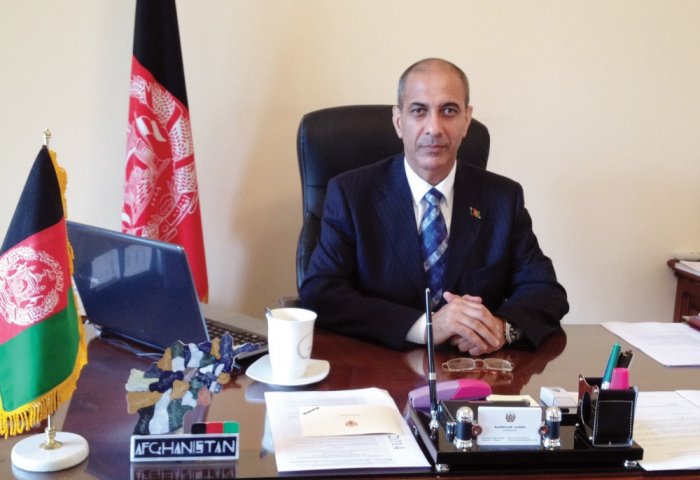 Newly appointed Ambassador Extraordinary and Plenipotentiary of the of the Islamic Republic of Afghanistan to Turkmenistan Najibullah Alihil (Photo: The Budapest Times)

President of Turkmenistan Gurbanguly Berdimuhamedov, received the newly appointed Ambassador Extraordinary and Plenipotentiary of the Islamic Republic of Afghanistan to Turkmenistan Najibullah Alihil, who presented credentials to the Turkmen leader.

During the Tuesday meeting, Turkmen Leader congratulated the diplomat on his appointment to the responsible post and wished him success in his work to strengthen the Turkmen-Afghan dialogue.

The exchange of views on the prospects of interstate relations took place during the meeting. Among the promising areas of partnership, President Gurbanguly Berdimuhamedov and the Ambassador of Afghanistan identified the trade and economic sphere, as well as the humanitarian and cultural cooperation.

At the same time, the sides paid special attention to the implementation of agreements reached at the highest level, as well as important joint infrastructure projects. In this context, the they emphasized the importance of the construction of the Turkmenistan-Afghanistan-Pakistan-India (TAPI) gas pipeline, which is designed to bolster friendship and effective cooperation in the region. At the same time, the parties noted the importance of projects interconnected with TAPI - the laying of power lines and fiber-optic communications along the route Turkmenistan-Afghanistan-Pakistan.

The Afghan representative expressed gratitude to the Head of State for the Turkmenistan’s active support in the peaceful reconstruction of Afghanistan.

Turkmenistan supplies its southern neighbor with electricity on preferential terms, regularly sends humanitarian supplies, constructs social facilities in Afghanistan, and provides the Afghan youth with the opportunity to study at Turkmen universities.

Following the results of the official visit of the President of the Islamic Republic of Afghanistan Ashraf Ghani to Turkmenistan in February this year, Presidents of the neighboring countries inked the Strategic Cooperation Agreement.