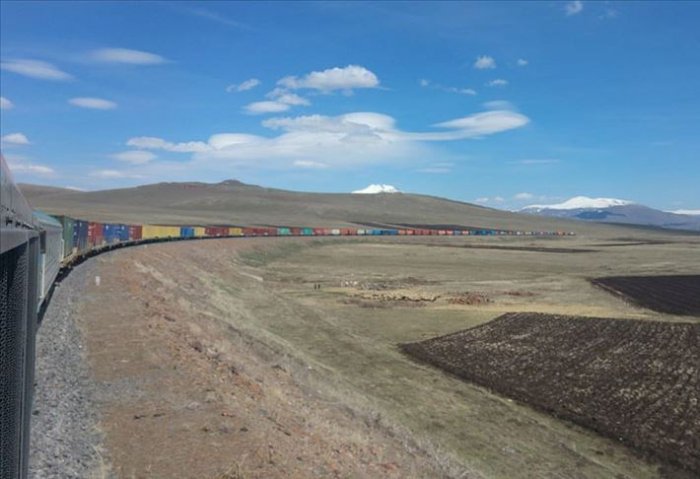 A 940-meter freight train, the longest to have ever operated on the Baku-Tbilisi-Kars Railway (BTK) connecting Europe and Asia, departed Turkey for Central Asia on Saturday, the Turkish Anadolu Agency reported citing the Minister of Transport and Infrastructure of Turkey Adil Karaismailoğlu.

According to the agency, the train, consisting of 82 containers carrying various Turkish products, departed from the eastern province of Kars. It will stop in Azerbaijan, Kazakhstan, Turkmenistan, before reaching its final destination, Uzbekistan.

Minister Karaismailoğlu said the train will drop its cargo in the countries on the line and “reach Uzbekistan after 9 days,” adding that “within this 9-day period, it will deliver all the loads.”

Foreign trade for many countries has faced difficulties due to the worldwide measures taken to prevent the spread of the coronavirus, while railway transportation has gained new momentum as more cargo can be carried in a single round with less human interference.

A significant amount of cargo is now being carried via railroad, the minister said, while following detailed disinfection processes.

“There are many items in the train, from cleaning materials to automotive industry products,” Karaismailoğlu said, adding that all transportation operations are carried out without human contact and follow strict disinfection processes.

The BTK line, launched in October 2017, connects Turkey, Azerbaijan and Georgia, establishing a link between Europe and China.