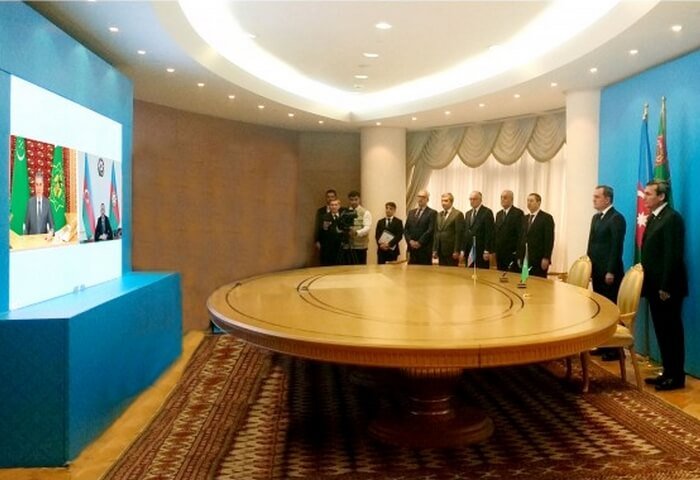 Presidents of Turkmenistan and Azerbaijan noted the historical significance of the energy agreement between the two countries on Dostluk field.

Cooperation between Turkmenistan and Azerbaijan, located on east and west coasts of the Caspian Sea rich in oil and gas reserves, reached a major milestone with the signing of a document on the joint development of one of the largest offshore hydrocarbon fields.

President of Turkmenistan Gurbanguly Berdimuhamedov and President of Azerbaijan Ilham Aliyev noted the historical significance of the Memorandum of Understanding signed on Thursday by foreign ministers of the two countries on joint exploration and development of hydrocarbon resources of Dostluk field in the Caspian Sea.

President Gurbanguly Berdimuhamedov, who took part in the signing ceremony via video link, noted that the Memorandum is the result of many years of work between the two countries.

Turkmen Leader stressed that this work is aimed at unlocking the enormous joint potential of the two largest energy states and creating favorable conditions for the development of sustainable energy in the Caspian region.

“Our countries are completely self-sufficient. They do not depend on international loans, foreign aid or any other forms and types of external influence. We are countries that are strongly attached to our national, moral and ethical traditions. This is a foundation that leads us forward,” Azerbaijani President Ilham Aliyev said, joining the ceremony through video link from Baku.

The reserves of the hydrocarbon field can be refined later using modern seismic exploration methods and possibly exploratory drilling, Ibrahim Ahmadov, Deputy Head of the Public Relations and Events Organization Department of SOCAR, told Trend news agency in an interview. He added that the signing of the Memorandum was the first step towards identifying many technical and commercial issues related to the future development of this field.

There is a great potential for the development of relations between our countries in the oil and gas industry, Ahmedov noted, adding that “in this regard, the new name of our joint project, Dostluk (Friendship), is symbolic.”

Foreign Ministry of Turkey in a written statement welcomed the energy agreement between Azerbaijan and Turkmenistan on Dostluk field.

"We wish that this agreement will further strengthen the friendship between the two countries, will be auspicious for the friendly and brotherly peoples of Turkmenistan and Azerbaijan and contribute to the prosperity and stability of the region," the Turkish Foreign Ministry said.

The Convention on the Legal Status of the Caspian Sea, signed by five Caspian states – Turkmenistan, Kazakhstan, Russia, Azerbaijan and Iran – in August 2018, marked the beginning of a new stage of energy cooperation in the Caspian Sea region.