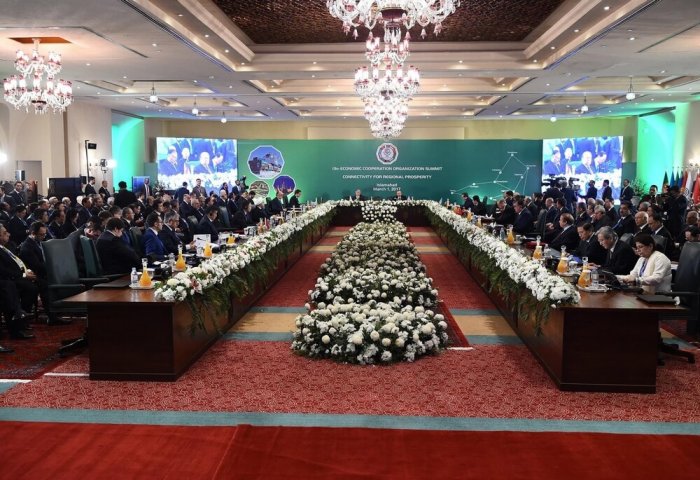 Deputy Chairman of the Cabinet of Ministers, Minister of Foreign Affairs of Turkmenistan Rashid Meredov during a Friday meeting of the Cabinet of Ministers reported to President Gurbanguly Berdimuhamedov on the preparations for the participation of the Turkmen side in the summit of the Economic Cooperation Organization (ECO) and on the chairmanship of Turkmenistan in the ECO this year.

Preparations are currently underway for the participation of the Turkmen side in the 14th ECO high-level meeting, which will be organized by Turkey via video link on March 4, the official media of Turkmenistan reports.

In order to successfully fulfill the ECO chairmanship, a draft of the corresponding Concept has been developed, which defines a number of key tasks. Among the tasks in the draft Concept are intensification of investment activities in the ECO member states, the creation of free trade and economic zones, the formation of new economic corridors, including trade, energy, transport and logistics.

The draft Concept defines the implementation of measures to promote the socio-economic development of Afghanistan among the important aspects of cooperation in the ECO format.

During the meeting, it is proposed to organize a visit of the ECO Secretary General to Turkmenistan in March of this year and to consider holding the 15th high-level meeting of the Organization in Ashgabat on ECO Day.

The Head of State gave the Vice-Premier specific instructions to carry out organizational and other relevant work, including the preparation for the participation of the Turkmen side in the upcoming ECO Summit.

The Economic Cooperation Organization is a regional interstate economic organization founded in 1985 by the countries of Central Asia and the Middle East. Turkmenistan became a member of ECO in 1992.