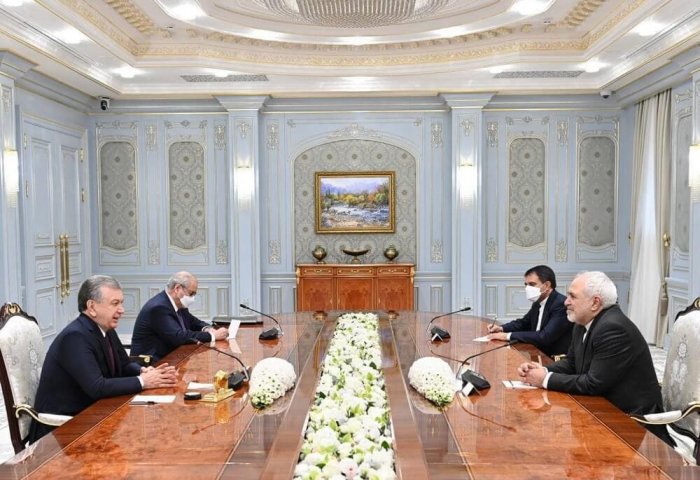 The sides paid special attention to the promotion of new cooperation projects. (Photo: Press service of the President of Uzbekistan)

The President of Uzbekistan Shavkat Mirziyoyev and the Iran’s Foreign Minister Muhammad Javad Zarif in a meeting on Monday in Tashkent noted the importance of building up cooperation, including the development of the Uzbekistan-Turkmenistan-Iran-Oman transport corridor.

During the meeting, the officials discussed the current state and prospects for the development of Uzbek-Iranian relations in the political, trade and economic, investment, transport and logistics and other spheres, the press service of the President of Uzbekistan said in a press release.

The sides paid special attention to issues of economic cooperation, development of trade relations and promotion of new cooperation projects.

The Uzbek President and the Iranian Foreign Minister emphasized the importance of building up cooperation in the transport-communication sphere, including the effective involvement of Iranian seaports and the development of the Uzbekistan-Turkmenistan-Iran-Oman transport corridor.

Relevant aspects of international and regional agenda of a mutual interest, including regional security and promotion of the peace process in Afghanistan were discussed among other issues.

As part of his visit to Central Asia, the Iranian Foreign Minister will also visit Kyrgyzstan, Kazakhstan and Turkmenistan.