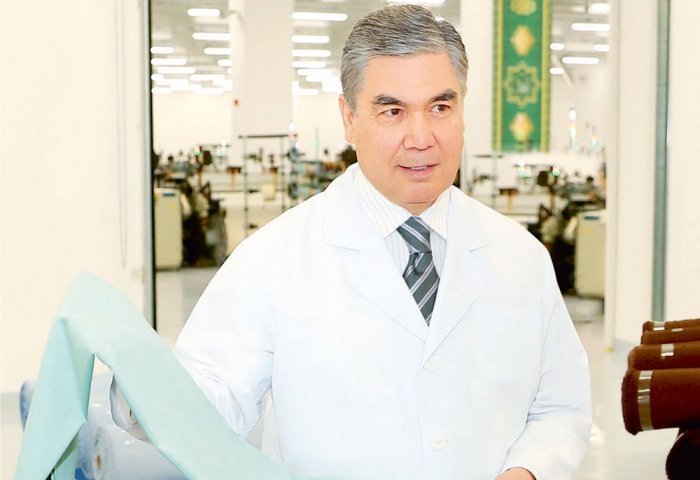 President of Turkmenistan Gurbanguly Berdimuhamedov during his working trip to Ahal velayat’s Kaka etrap on Wednesday took part in the opening ceremony of a new textile complex, the country’s official media reports.

Addressing the ceremony participants, the Head of State said today’s solemn event is timed to the opening of another new facility in the textile industry, which is one of the key segments of Turkmen economy, – a textile complex in Kaka etrap, capable of annually processing 5,000 tons of fine-fiber cotton.

Kaka Textile Complex worth US$147.85 million has the capacity to annually produce 3,650 tons of high-quality yarns, 12 million square meters of different fabrics and 1.2 million finished garments, Turkmen President noted during his speech at the opening ceremony, adding that the commissioning of the complex created 1,300 jobs.

The total area of new textile complex, operating under the Ministry of Textile Industry of Turkmenistan, is 18 hectares. In addition to production facilities, the complex has a 2-storey administrative building, production warehouses, a transformer station, a fire safety building and a parking lot, as well as a canteen with 450 seats, a sports ground and 2 hotels capable of accommodating 16 people.

The new textile factory is capable of producing textiles that were not previously produced in the country – a compact penye yarn, as well as opportunities for the production of mixed types of yarn.

The Kaka Textile Complex was awarded ISO 9001 and SA 8000 certificates, as well as the OEKO-TEX STANDARD 100 certificate, which confirms the safety and absence of harmful chemicals at any stage of the production process.

During the opening ceremony, the Head of State informed that the construction of a new textile complex in Ahal velayat’s Babadayhan etrap is at its final stages. The new complex worth US$151.8 million will be able to annually produce 3,300 tons of fine-fiber yarn, 20 million square meters of different fabrics and 3.5 million finished garments.

The Ministry of Textile Industry of Turkmenistan presently operates more than 60 enterprises, which employ over 24 thousand people. Domestic textiles are exported to dozens of countries around the world.