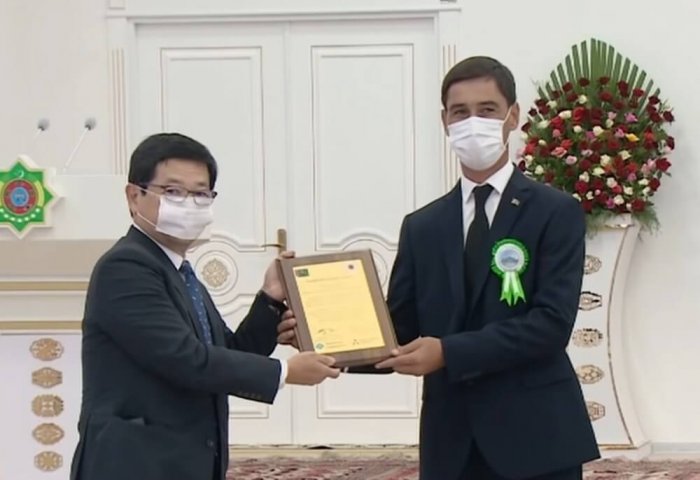 The Lebap State Power Plant’s new facility was awarded the Certificate of Innovative Technologies of the Swiss Federal Institute of Technology.

Members of the government, representatives of public organizations and the media, and the Japanese delegation led by Minister of Economy, Trade and Industry Kiyoshi Ejima, who arrived in the country, took part in the ceremony.

The project was implemented by Türkmenenergo (Turkmen Energy) State Corporation of the Ministry of Energy of Turkmenistan together with foreign partners – Japanese companies Sumitomo Corporation and "Mitsubishi Power Ltd, and Turkish Rönesans Holding.

Sumitomo Corporation began construction and installation work at the power generation facility in November 2018. The subcontracting work was carried out by Rönesans Endüstri Tesisleri Inşaat Sanaýi ve Tijaret Anonim Şirketi, which also has extensive experience in the construction of energy facilities.

The new power plant is equipped with three gas turbines by Japanese Mitsubishi Power Ltd, with a capacity of 144MW each. This power generation technologies are used for the first time in the history of the electric power industry of Turkmenistan. In addition to the power units, the facility has all the necessary auxiliary facilities.

With the commissioning of the new plant, the capacity of the country's energy system will increase by 432 megawatts, and the capacity of the existing Lebap State Power Plant will be 581.2 megawatts. This plant will increase the reliability of energy supply to consumers in the velayat, and create new jobs. The commissioning of the plant also made it possible to increase the volume of electricity supplies to Afghanistan and the countries of Central Asia, including Uzbekistan and Kyrgyzstan, according to the report.

The new facility of the Lebap State Power Plant was awarded the Certificate of the Sumitomo Corporation, certifying that the M701DA gas turbines manufactured by Mitsubishi Power Ltd were installed at this power plant for the first time in Central Asia, as well as the Certificate of Innovative Technologies of the Swiss Federal Institute of Technology and the Certificate for sustainability and efficiency of the German Max Plank Energy Institute.