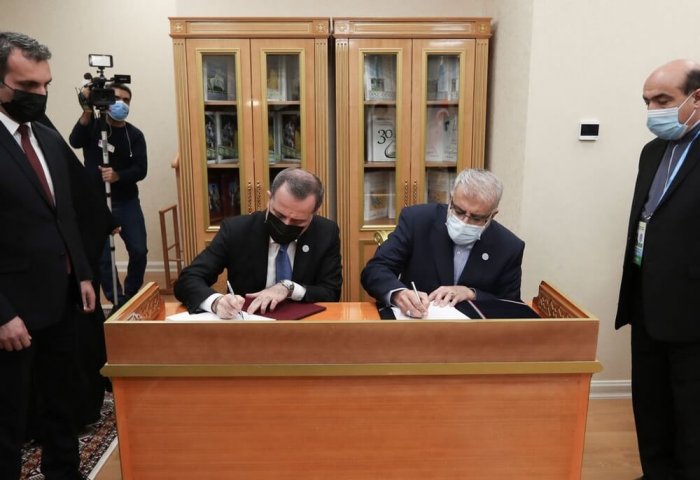 Turkmenistan will sell 5 to 6 million cubic meters of gas per day to Azerbaijan through Iranian territory. (Photo: Shana news agency)

Turkmenistan, Iran and Azerbaijan have signed on Sunday a gas swap agreement for up to 2 billion cubic metres (bcm) per year.

The agreement was signed on the sidelines of the Economic Cooperation Organization (ECO) summit in Turkmenistan’s capital Ashgabat by the ministers, overseeing the oil and gas issues, of the three countries, the Turkish news agency Anadolu Agency reported on Monday.

Iran's Petroleum Minister Javad Owji, who was accompanying President Ebrahim Raisi to the ECO summit, told reporters that under the trilateral agreement, Iran will receive gas from Turkmenistan and deliver an equivalent amount to Azerbaijan.

Turkmenistan will sell 5 to 6 million cubic meters of gas per day to Azerbaijan through Iranian territory. The deal’s implementation is expected to start in less than a month.

Speaking to reporters after the deal was signed, Raisi said it will "strengthen ties" between the three countries.

Iranian government spokesman Ali Bahadori Jahromi in a tweet late Sunday said the gas that Iran will receive under the agreement will cater to the needs of at least five provinces of the country.

On the sidelines of the ECO summit, the issue between Tehran and Ashgabat over gas debt also came up.

Iran's oil minister assured his Turkmen counterpart that the first installment to clear the gas debt would be paid soon. According to reports, Iran owes Turkmenistan around $1.8 billion in payments for gas delivered to Tehran.

Iran has major natural gas fields in the south, but has imported gas from Turkmenistan since the late 1990s for distribution in its northern provinces, especially during the winter.

In January 1, 2017, Turkmenistan has stopped gas exports to Iran due to the debt of the National Iranian Gas Company (NIGC) for the previous gas supplies.