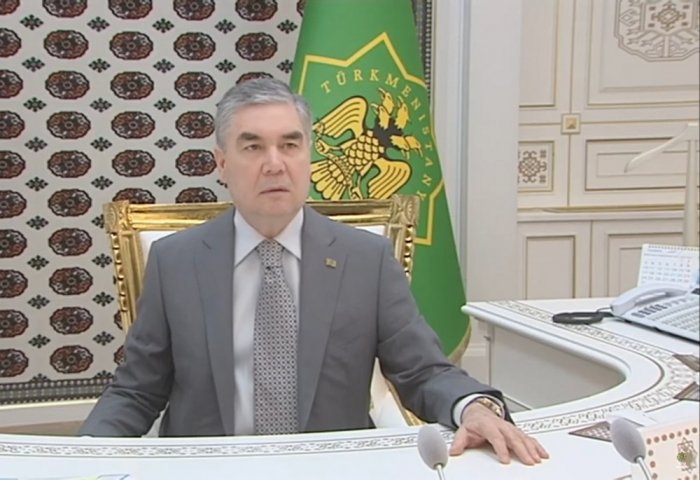 President Gurbanguly Berdimuhamedov said the agricultural activities in some etraps of velayats are not conducted at the proper level and expressed dissatisfaction with their conduct.

Turkmen President Gurbanguly Berdimuhamedov during the online meeting on Monday expressed dissatisfaction with the lack of seasonal agricultural work and road construction in the velayats.

The governors reported on agricultural activities in the fields and preparation for the spring works.

Following the reports, the President said the agricultural activities in some etraps of velayats are not conducted at the proper level and expressed dissatisfaction with their conduct, non-compliance with the requirements. The Turkmen Leader also pointed out the need for measures to clean irrigation canals.

The Head of State expressed dissatisfaction with the work carried out in this direction by Deputy Chairman of the Cabinet of Ministers Esenmyrat Orazgeldiyev, who supervises the agro-industrial complex, and strictly demanded that the tasks to be carried out must be carried out responsibly and comprehensively.

According to the General Prosecutor’s report, with the transition of road construction equipment to the jurisdiction of local administrations the level of road construction works significantly decreased in all parts of the country, the relevant equipment is not used at full capacity, there is a shortage of spare parts.

Following the report, the Head of State emphasized that such organization of affairs is unacceptable and instructed to continue inspections in this direction.

Afterwards, reporting on the results of his working visits to the regions, President Gurbanguly Berdimuhamedov emphasized that the implementation of the National Rural Program was not organized at the proper level in the regions. The pace of construction of roads, social and cultural facilities does not meet today's requirements either.

The meeting also touched upon important issues of socio-economic development of the velayats of the country, the ongoing work on the implementation of national reform programs and a number of other important issues related to public life.