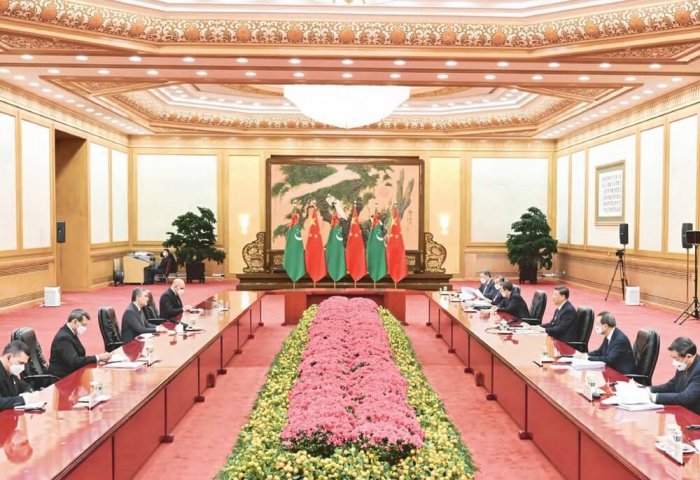 President of Turkmenistan Gurbanguly Berdimuhamedov and President of China Xi Jinping in a meeting in Beijing on Saturday agreed on construction of the fourth branch of a gas pipeline from Turkmenistan to China.

“During the negotiations, the sides reached an agreement on the project for the construction of the fourth branch of the Turkmenistan-China gas pipeline, instructing the Turkmen-Chinese and Chinese-Turkmen committees for cooperation to conduct joint work in this direction,” the official media of Turkmenistan reports.

During the meeting, the oil and gas sector was identified as a priority area of bilateral cooperation.

President Berdimuhamedov reiterated Turkmenistan's readiness to engage in a substantive discussion on increasing the supply of natural gas to China through the construction of the fourth pipeline, highlighting a number of aspects relating to the implementation of this project.

To this end, President Berdimuhamedov stressed the need to determine the volume of Turkmen natural gas to be supplied to China, adding that it would be expedient to analyze the possibility of developing the second phase of the Turkmen Galkynysh field, one of the world's largest gas fields, to become the main resource base for natural gas supplies to China via the fourth (D) branch.

The Turkmen Leader expressed confidence that the two countries would hold effective talks on the construction of gas desulfurization plants, compressor stations and a gas pipeline from the Galkynysh field to the border between Turkmenistan and the neighboring country.

Focusing on the necessity of beginning discussions on price of gas to be delivered via the fourth branch, President Berdimuhamedov said “we expect the Turkmen and Chinese specialists will work together on these issues on the basis of the world experience in the field of pricing commodity pipeline gas”.

Upon reaching bilateral agreements, the Turkmen side may consider the participation of a Chinese company in the development of the second phase of the Galkynysh field at the expense of direct investments by China. Return of these investments will be implemented by delivery of Turkmen natural gas, the Turkmen President stated.

During the talks, Xi said China is willing to work with Turkmenistan to enlarge the volume and scale of natural gas cooperation and raise it to a brand-new level, according to Xinhua news agency report.

The sides additionally exchanged views on other promising areas of bilateral partnership, with much attention paid to cooperation in the humanitarian sphere in addition to the trade-economic sphere.

The Turkmen President also invited the Head of China to visit Turkmenistan at a time convenient for him.

Having exchanged best wishes for each other and the two countries' peoples, President Gurbanguly Berdimuhamedov and President Xi Jinping expressed confidence in further successful development of the fruitful Turkmen-Chinese cooperation.

The Turkmen Leader visited China for the opening ceremony of the Beijing 2022 Winter Olympic Games.