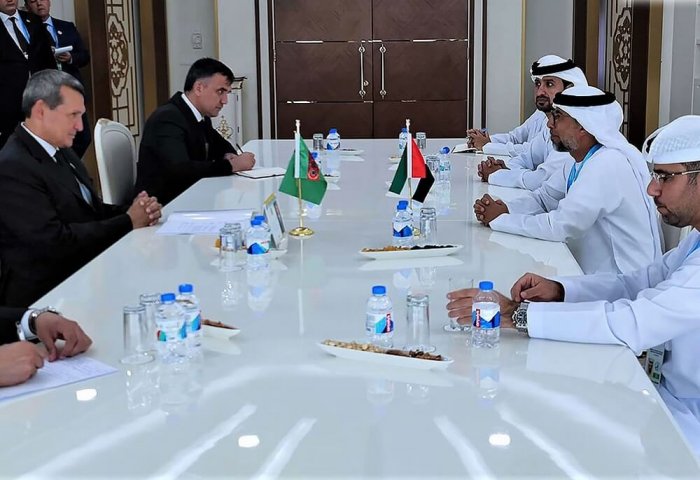 The foreign ministers of Central Asian countries and member states of the Cooperation Council for the Arab States of the Gulf (GCC) will hold the first meeting on strategic dialogue in September this year, the Ashgabat based Orient news agency reported following talks between Foreign Minister of Turkmenistan Rashid Meredov and Minister of Energy and Infrastructure of the UAE Suhail Al-Mazroui on Monday.

The meeting was held on the sidelines of the Ministerial Transport Conference of Landlocked Developing Countries held in Avaza National Tourist Zone located at the Turkmen coast of the Caspian Sea.

The sides discussed bilateral economic cooperation, in particular the prospects of opening transport and logistics routes, establishment of cooperation between Turkmenbashi port and the ports of Dubai and Abu Dhabi, integration of the Turkmen port into the world system of seaports.

The officials stated that President of Turkmenistan Serdar Berdimuhamedov will soon pay an official visit to the UAE at the invitation of President Mohammed bin Zayed Al Nahyan.

The sides reviewed progress in gas chemical, financial and transport projects in Turkmenistan with UAE participation and a number of agreements, including financing of construction of an airport in Jebel, a hybrid power plant in Serdar and a chemical plant for the production of combined fertilizers in Turkmenabat.

The meeting also discussed opportunities for cooperation in the textile industry, export of Turkmen products to the UAE market and on to the Gulf countries and Africa.