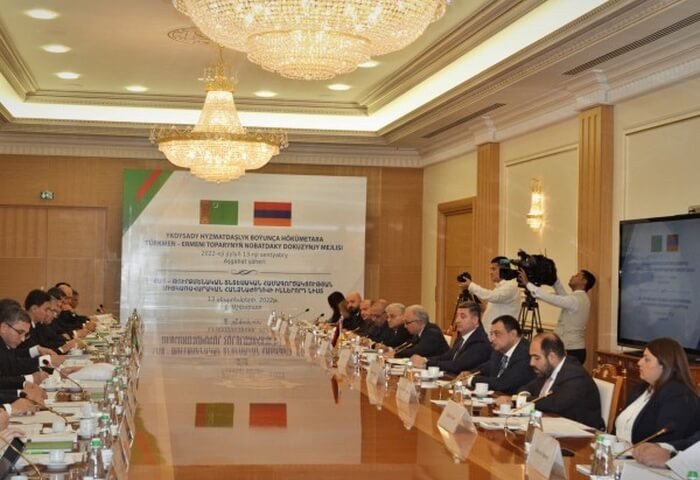 As per data of Statistical Committee of Armenia, the current trade figure for 2022 between Turkmenistan and Armenia stands at $11.52 million.

The ninth meeting of the Intergovernmental Turkmen-Armenian Commission on Economic Cooperation took place on Tuesday at the building of the Chamber of Commerce and Industry of Turkmenistan in Ashgabat. The parties agreed to promote an increase in trade turnover between the two countries and expand the range of exported goods by establishing contacts between business circles of the countries and organization of meetings.

The Commission is co-chaired by Shahym Abdrakhmanov, the Deputy Chairman of the Turkmen Government overseeing the country's oil and gas industry, and Minister of Territorial Administration and Infrastructure of Armenia Gnel Sanosyan, the Ministry of Foreign Affairs of Turkmenistan said in its press release.

The meeting discussed a wide range of issues related to the implementation of existing agreements between the two countries.

The parties stated that the export of products of oil and gas, agricultural, food and textile industries of Turkmenistan to Armenia will contribute to the development and strengthening of trade relations between the two countries.

As per data of Statistical Committee of Armenia, the current trade figure for 2022 between Turkmenistan and Armenia stands at $11.52 million, Gnel Sanosyan said in an interview with the Turkmen state media following the meeting.

The Intergovernmental Turkmen-Armenian Commission on Economic Cooperation signed a relevant protocol on the results of its ninth meeting.