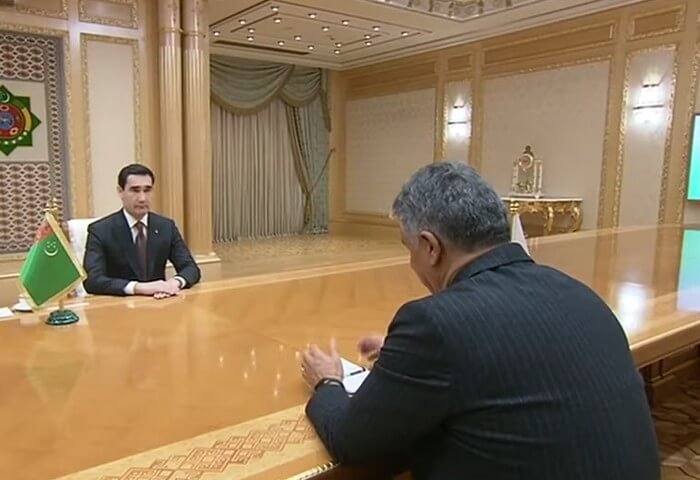 The meeting stressed that there are favorable prospects for further deepening contacts in the fields of culture and art.

President of Turkmenistan Serdar Berdimuhamedov held a meeting with the Secretary General of the International Organization of Turkic Culture (TURKSOY) Sultan Raev in Ashgabat on Monday, the official Turkmen media reports.

Expressing sincere gratitude to the Head of Turkmenistan for the time and opportunity to discuss priority issues of cooperation, Sultan Raev said TURKSOY highly appreciates Turkmenistan's support in developing multifaceted cooperation within the organization’s framework and the significant contribution of Turkmenistan to promoting the rich cultural heritage of Turkic peoples in the world.

President Serdar Berdimuhamedov congratulated Sultan Raev on his election to the post of Secretary-General of TURKSOY and wished him success in his responsible work. The Head of State also stated with satisfaction the fruitful nature of the established dialogue with the organization.

The meeting stressed that there are favorable prospects for further deepening contacts in the fields of culture and art, promotion of scientific research in these fields, mutually beneficial cultural exchanges, joint events. The sides also discussed the 30th anniversary of TURKSOY to be celebrated next year and celebration of the 300th anniversary of great poet and philosopher Magtymguly Pyragy in 2024.

The TURKSOY Secretary General expressed his gratitude to the Turkmen President for the fruitful meeting and said Turkmenistan demonstrates a proactive, constructive approach to strengthening humanitarian relations between nations and peoples not only of the Turkic world but also the world.

At the end of the meeting, President Serdar Berdimuhamedov and Sultan Raev expressed confidence that cooperation within the framework of TURKSOY will continue to develop successfully, contributing to building a fruitful intercultural dialogue.