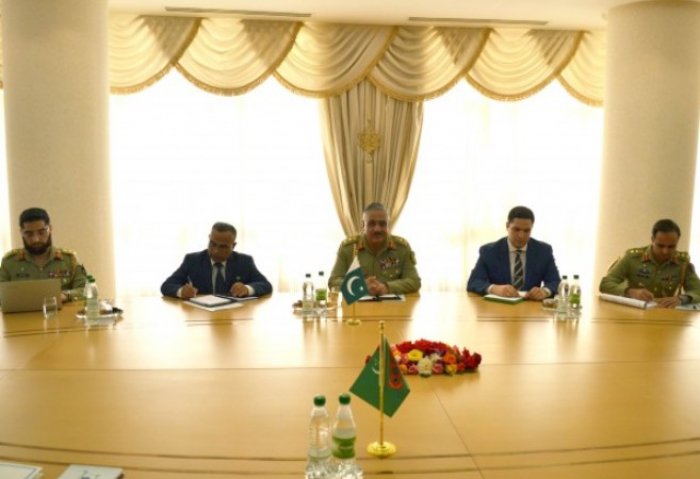 Ministry of Foreign Affairs of Turkmenistan hosted a meeting with the delegation of the Islamic Republic of Pakistan led by the Chairman of Joint Chiefs of Staff Committee of the Pakistan Armed Forces General Zubair Mahmood Hayat, the Ministry said in a press release on October 8.

In the beginning of the talks, the parties noted with satisfaction the high level of cooperation between Turkmenistan and Pakistan based on the principles of equality, good neighborhood and mutual respect.

The parties also discussed the bilateral ties in political, economic and humanitarian spheres. Particularly, the successful advancement of the multilateral transport and energy projects, such as the construction of Turkmenistan-Afghanistan-Pakistan-India gas pipeline, as well as the electrical and fiber-optic communication lines on Turkmenistan-Afghanistan-Pakistan route were underlined. The parties noted that the implementation of these projects will not only contribute to the social-economic development of the countries-participants of the projects, but also to the whole region.

Turkmen and Pakistani representatives also discussed the opportunities of expanding cooperation in the field of profile education and organization of visits of specialists for the exchange of expertise between the relevant ministries and departments of Turkmenistan and Pakistan.

Turkmen Foreign Ministry also hosted a meeting with the Ambassador Extraordinary and Plenipotentiary of the Republic of Belarus to Turkmenistan Vyacheslav Beskosty on Tuesday.

During the meeting, the parties emphasized the importance of deepening mutually beneficial ties at the interstate, intergovernmental, as well as inter-parliamentary levels. Diplomats also touched upon issues of further cooperation between the two states in the political, diplomatic, trade, economic, cultural and humanitarian fields.