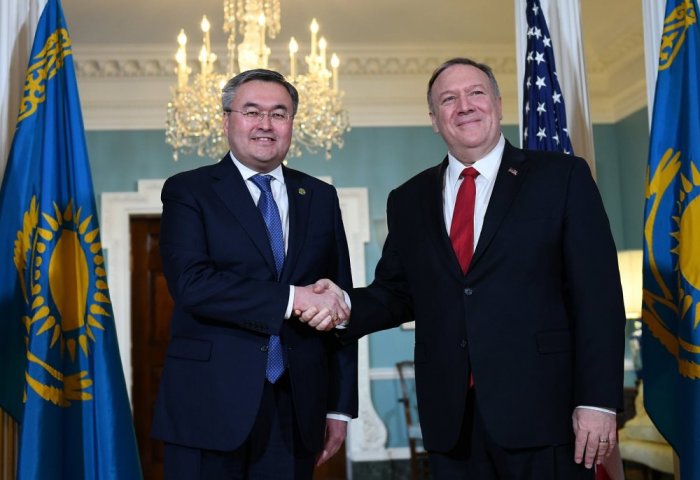 Minister of Foreign Affairs of the Republic of Kazakhstan Mukhtar Tleuberdi met with the U.S Secretary of State Mike Pompeo in Washington.

“Central Asia has been and remains an important crossroads for human civilization. Although this region is remote and largely unknown to most Americans, Central Asia has nevertheless been at the nexus of global transit routes for centuries,” the U.S. State Deparment spokesperson said on Friday.

According to the official, since the five countries of Central Asia achieved their independence 28 years ago, the United States has been consistent in its commitment to their independence, sovereignty, and territorial integrity.

“We have a vested interest in their stability, prosperity, and security. We seek to increase the region’s resilience and ability to address transnational security threats,” the official said.

The senior U.S. State Department official noted the U.S. supports measures to promote conditions that are conducive to local and American investment.

“The United States and our partners in Central Asia share a common goal of bringing peace and security to Afghanistan,” the official noted. “Ensuring stability and reintegrating Afghanistan back into the broader region will open doors to increased economic connectivity and opportunity throughout Central Asia.”

To intensify the engagement with Central Asia, in 2015 the United States created a new platform for cooperation known as the C5+1, a diplomatic forum for dialogue and joint efforts to address common challenges. Over the last couple of years, significant joint projects have been launched within its framework.

“This regional and bilateral engagement reflects the objectives and priorities embedded in the Trump administration’s new Central Asia strategy, which we hope to brief publicly soon,” said the spokesperson.

Turkmen delegation headed by the Minister of Foreign Affairs Rashid Meredov attended the annual Turkmen-American political consultations in Washington in November. During the meeting at the U.S. State Department, the participants discussed prospects of deepening cooperation between Turkmenistan and the United States in political, trade-economic, cultural-humanitarian and other spheres.