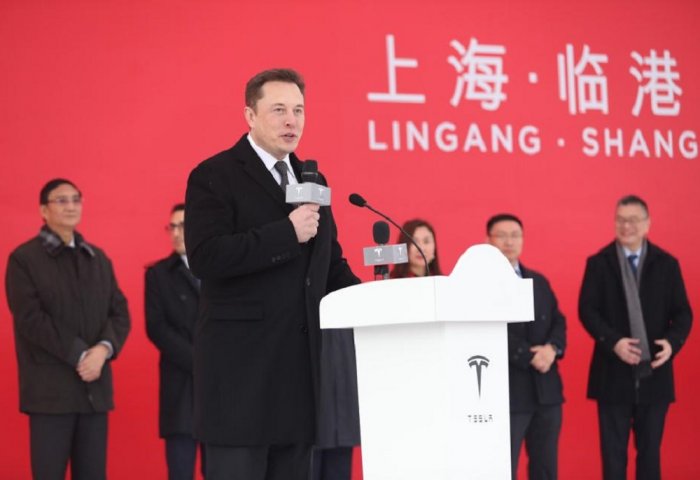 Tesla CEO Elon Musk at the groundbreaking ceremony for the company's Gigafactory 3 in Shanghai on January 7, 2019 (Photo:Tesla)

The fortune of Elon Musk rose $6.1 billion on last Friday, according to the Bloomberg Billionaires Index, after the carmaker Tesla Inc.’s stock surged 11%. Musk is now the world’s seventh-richest person, ahead of Warren Buffet and tech titans Larry Ellison and Sergey Brin.

The 49-year-old entrepreneur owns about a fifth of Tesla's outstanding stock, which comprises the bulk of his $70.5 billion fortune. According to reports, his majority ownership of closely held Space-X accounts for about $15 billion.

According to Fortune, shares of the electric car-maker Tesla have risen 269% this year. The firm’s booming valuation helped Musk land a $595 million pay-day earlier this year, making him the highest-paid CEO in the U.S.

Musk is the latest tech entrepreneur to rise above Buffett in the rank’s of the world’s richest. Steve Ballmer, the former Microsoft Corp. CEO, and Google co-founders Larry Page and Brin also have passed the Oracle of Omaha.

CEO of Reliance Industries Ltd and India’s richest man Mukesh Ambani surpassed both Buffett and Musk last week and is now worth $72.4 billion.

Warren Buffett’s fortune dropped earlier this week when he donated $2.9 billion in Berkshire Hathaway stock to charity. The 89-year-old has given away more than $37 billion of Berkshire shares since 2006.