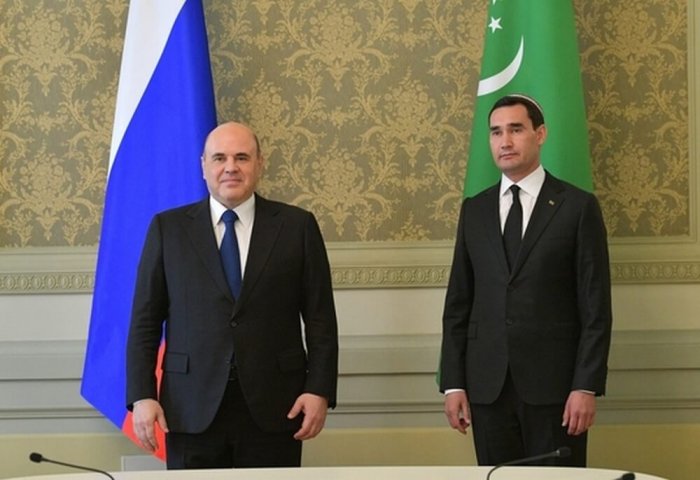 The Russian Prime Minister Mikhail Mishustin noted that Turkmenistan and Russia have made big advances in trade. (Photo: government.ru)

Russia would like to boost bilateral cooperation with Turkmenistan, create the necessary conditions for restarting promising joint projects and initiatives in various areas of the economy, the Russian Prime Minister Mikhail Mishustin said during a meeting with the Vice-Premier of Turkmenistan Serdar Berdimuhamedov in Kazan on Friday.

He noted that two countries have “made big advances in trade despite the crisis and the global processes that have a negative impact on our relations,” according to the transcript of the meeting published on official website of the Government of the Russian Federation.

He cited data from Russian statistics, which indicate that trade turnover increased by almost 40% compared to 2019 and reached almost $1 billion. "This is a record level over the past five years," Mishustin stressed.

In turn, the Deputy Chairman of the Cabinet of Ministers of Turkmenistan Serdar Berdimuhamedow thanked the Russian side for the invitation to participate in the Eurasian Intergovernmental Council meeting and expressed hope that this meeting will stimulate the development of mutually beneficial cooperation with Russia in both bilateral and multilateral formats.

He stressed that the country "pays great attention to cooperation with Russia. Obviously, the key factor of dynamic bilateral relations is an open and friendly political dialogue between the presidents of Turkmenistan and the Russian Federation."

The Turkmen Vice-Premier added that the bilateral cooperation is developing in all areas.

On Friday, a high-ranking delegation of Turkmenistan led by the Vice-Premier of Turkmenistan participated in the meeting of the Eurasian Intergovernmental Council and held talks with the President of Tatarstan Rustam Minnikhanov.