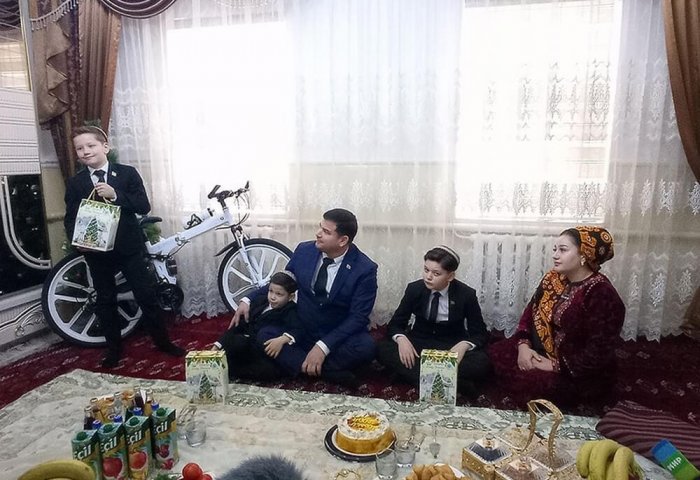 The schoolboy Ibrahim Rustemov on behalf of President Gurbanguly Berdimuhamedov was presented with a new snow-white bicycle.

In Thursday morning, Ayaz Baba (Father Frost) came to the house of Ibragim Rustemov, a schoolboy of the Ashgabat’s secondary school No 64, and on behalf of Turkmen President Gurbanguly Berdimuhamedov presented to him the bicycle.

During the celebration at the country's main New Year tree on the square in front of the Älem Cultural and Entertainment Center on Wednesday, Ibragim was lucky enough to talk to the Turkmen President in person. The boy told the Head of State of his letter with New Year wishes sent to Ayaz Baba.

Ibragim said in his letter he asked for the opportunity to be photographed with the President of Turkmenistan and receive a bicycle as a gift, the country’s official media reports.

The first part of the boy's wish came true the day before, when the Turkmen Leader photographed with him during a celebration at the New Year tree. At that time, the Head of State promised that everything he wished would come true, because Turkmenistan is a land where children's dreams come true.

President Gurbanguly Berdimuhamedov personally congratulates younger generation every year on the approaching New Year, presents them with gifts and takes part in the festivities on this occasion. Traditionally, on the eve of the holiday, the Head of State presents gifts to fosters of the Döwletliler Köşgi.