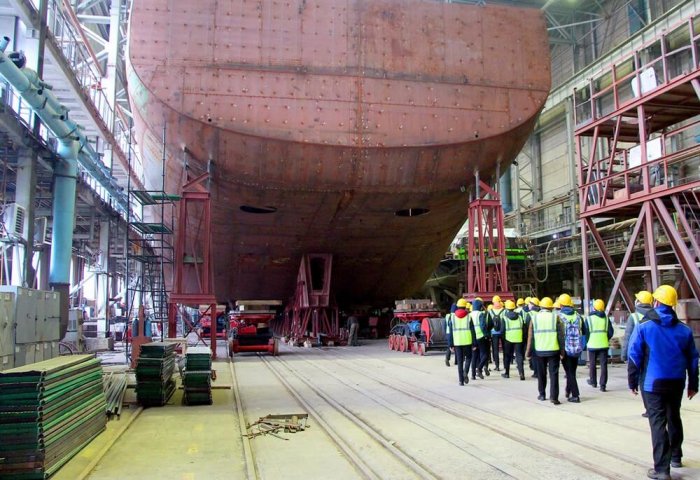 The Krasnye Barrikady shipyard specializes in the construction of floating offshore drilling rigs, platforms, as well as other vessels of various purposes.

Krasnye Barrikady shipyard, the production facility of the United Shipbuilding Corporation (USC) in Russia’s Astrakhan Region, is planning to attract new large orders in 2022, including the construction of ships for Turkmenistan and Iran, with the modernization of its existing production facilities, TASS news agency reported on Thursday with reference to Vladislav Dobrenkov, Head of the Marketing Department of the USC’s Southern Center of Shipbuilding and Ship Repair (SCSSR), in which Krasnye Barrikady is incorporated.

"In 2022 it is planned to attract quite a large number of orders, now they are being considered, and together with the USC the issue of building ships for Iran and Turkmenistan is being worked out. In addition to that, modernization of production capacities, increase of productivity through inclusion of new lines with installation of additional equipment is planned," Dobrenkov told journalists during the press tour.

In December 2017, the Arbitration Court of the Astrakhan region declared Krasnye Barrikady bankrupt. In May 2019, Russian President Vladimir Putin said at a meeting on the social and economic development of the region that the shipyard was "in a difficult situation," primarily due to the lack of the necessary number of orders. In June 2019, the SCSSR of the USC bought the plant at an open auction for 955 million rubles.

The Krasnye Barrikady shipyard was founded more than 120 years ago and specializes in the construction of floating offshore drilling rigs, platforms, as well as other vessels of various purposes.

Turkmen President Gurbanguly Berdimuhamedov and the Governor of the Astrakhan Region Igor Babushkin in a meeting in Ashgabat in December listed shipbuilding, ship repair and the petrochemical industry among the major areas of cooperation.