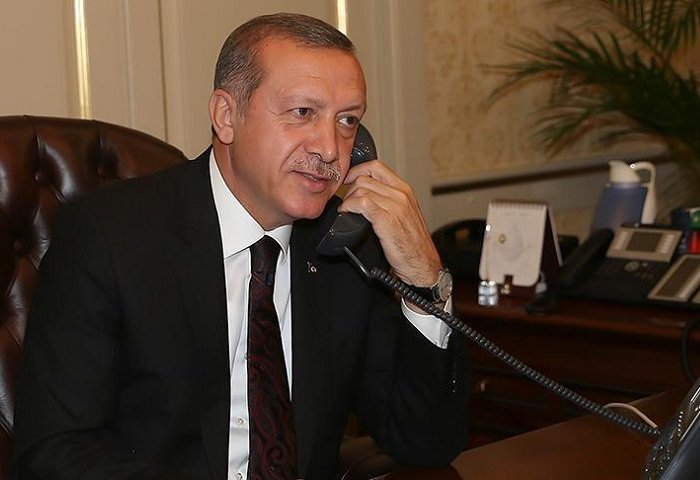 Having warmly welcomed his Turkish counterpart, the Turkmen Leader informed that according to the results of the March 12 presidential elections announced by the Central Election Commission, Serdar Berdimuhamedov was elected the new President of Turkmenistan.

At the same time, the Turkmen Leader said he intends to continue his active work in a position of the Chairman of the Halk Maslahaty chamber of the bicameral parliament Milli Gengesh.

The Turkish President, in turn, congratulated the Turkmen Leader on the early presidential elections successfully held on a broad alternative basis, which became another clear evidence of the broad democratic transformations taking place in Turkmenistan.

Having wished the Turkish President good health, long life and success in all undertakings, Gurbanguly Berdimuhamedov handed the phone to the President-elect of Turkmenistan.

Warmly congratulating Serdar Berdimuhamedov on his convincing victory in the elections, the President of Turkey wished him great success in his activities in this important and responsible post.

Sincerely thanking Recep Tayyip Erdogan for congratulations and wishes on his election to the highest state post, Serdar Berdimuhamedov said he intends to continue the course started by the incumbent President of the country, in particular, to take further steps to comprehensively develop relations between Turkmenistan and Turkey, and also support initiatives and efforts aimed at enriching the established productive interstate dialogue with a qualitatively new content.

At the end of the phone talk, the President-elect of Turkmenistan Serdar Berdimuhamedov wished the Turkish Leader good health and success in responsible state activities, and peace, well-being and prosperity to the people of the Turkey.

Early presidential elections were held in Turkmenistan on March 12. Deputy Chairman of the Cabinet of Ministers Serdar Berdimuhamedov won a landslide victory, gaining 72.97% of the votes.