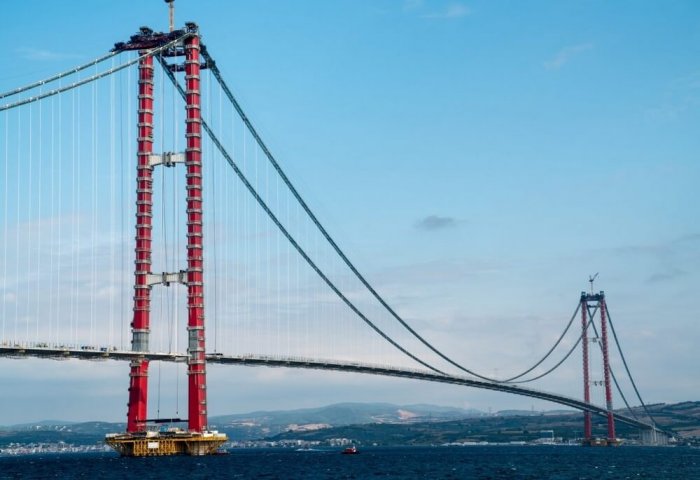 The 1915 Canakkale Bridge, one of Turkey’s megaprojects that spans the Dardanelles Strait and connects Europe and Asia, was inaugurated on Friday in Turkey's northwestern province of Canakkale, Turkish Anadolu news agency reports.

The landmark project’s inauguration coincides with the 107th anniversary of Turkey’s Canakkale naval victory during the World War One.

President Recep Tayyip Erdogan said during the opening ceremony that the bridge has the longest main span – the distance between the two towers – of any suspension bridge in the world.

The 2,023-meter length of its midspan symbolizes the year 2023, the 100th anniversary of the Republic of Turkey’s foundation. Its towers are 318 meters high and the total length of the bridge is 4.6 km.

With its two-way and six-lane road, the bridge will decrease the approximately one-hour ferry voyage between the two sides across the Dardanelles Strait to six minutes. Erdogan said the price for passenger vehicles to use the bridge would be 200 lira ($13.50).

It is the fourth bridge linking the European and Asian shores in Turkey, alongside the three built in Istanbul.

The work on the bridge was launched in March 2017, with more than 5,000 workers involved in the construction.