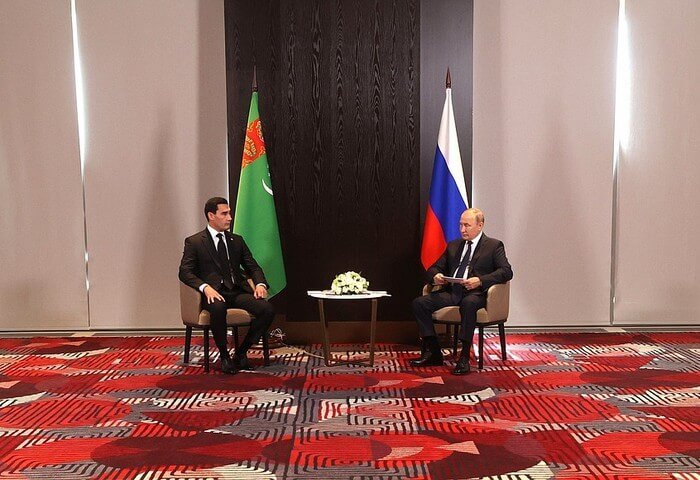 Russia intends to diversify economic cooperation with Turkmenistan in order to develop cooperation not only in energy, but also in other areas, TASS news agency cities the President of Russia Vladimir Putin as saying in a meeting with President of Turkmenistan Serdar Berdimuhamedov on Thursday in Samarkand.

The meeting took place on the sidelines of the summit of the Shanghai Cooperation Organization (SCO).

"Undoubtedly, the energy industry plays a special role in our relations," the Russian Leader stated, and dwelled on the work of Gazprom and Tatneft in Turkmenistan.

"We aim to diversify our economic ties through other areas of interaction. This refers to agriculture and the textile industry. We are ready to increase the supply of non-primary products to the Turkmen market," Putin added.

Expressing his gratitude for the opportunity to organize this meeting within the framework of the SCO summit of, the President of Turkmenistan conveyed warm greetings on behalf of the Chairman of the Halk Maslakhaty chamber of Turkmen parliament Milli Gengesh of Turkmenistan Gurbanguly Berdimuhamedov.

“I would like to note the high level of bilateral political relations. As you know, this was confirmed by mutual visits at the highest level,” President Berdimuhamedov said, adding that, in addition, inter-parliamentary ties between the two countries have significantly strengthened.

The Head of Turkmenistan also said that in October this year, the Halk Maslakhaty Chairman will visit Russia at the invitation of the Speaker of the Federation Council of Russia.

Turkmen President participates in the SCO summit as an honorary guest.