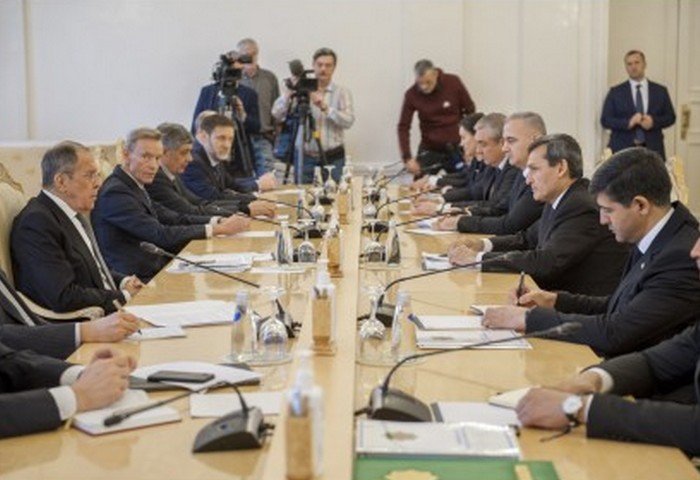 Following the talks, the sides signed the Programme of Cooperation between the Ministries of Foreign Affairs of Turkmenistan and the Russian Federation for 2023-2024.

Deputy Chairman of the Cabinet of Ministers, Minister of Foreign Affairs of Turkmenistan Rashid Meredov met with Foreign Minister of Russia Sergey Lavrov on Tuesday in Moscow.

The meeting took place within the framework of the two-day visit of Turkmen government delegation led by Rashid Meredov to Russia.

Opening the meeting, the Russian Foreign Minister stated the friendly, dynamic and consistent nature of bilateral relations developing on the principles of mutual respect, equality and trust, the Ministry of Foreign Affairs of Turkmenistan said in its press release.

In turn, the Turkmen Foreign Minister expressed gratitude to Russia for the continued support for Turkmenistan's international initiatives, including those in the field of energy security, sustainable transport, environment and a number of other areas.

The sides discussed in detail the state and prospects of cooperation in the foreign policy arena, in particular with regard to maintaining and strengthening regional and global stability, cooperation on the Caspian and Aral Sea issues, joint tackling of new challenges and threats.

The talks also paid attention to the trade-economic cooperation between the two countries, which in recent years has gained momentum. The top diplomats also stated the importance of expanding cultural and humanitarian ties between the countries.

The foreign ministers confirmed the firm mutual commitment to further developing relations of strategic partnership that meets the fundamental interests of the two countries, and would contribute to ensuring peace, stability and development at the regional and global levels.

Following the talks, the sides signed the Programme of Cooperation between the Ministries of Foreign Affairs of Turkmenistan and the Russian Federation for 2023-2024.