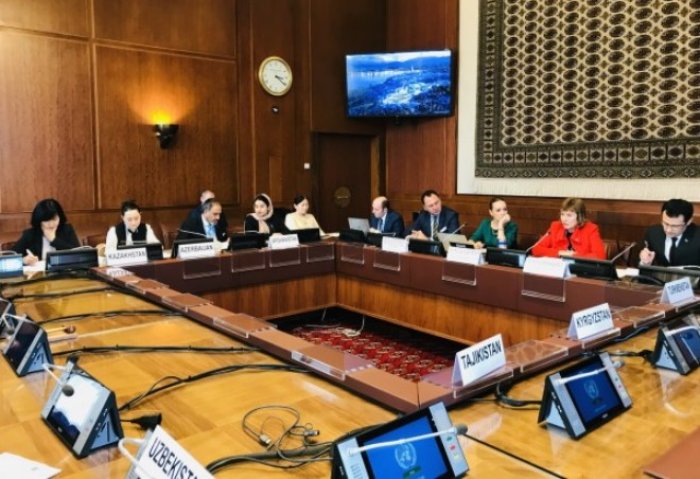 During the meeting, the Turkmen side announced the upcoming events in 2020 in the country.

A meeting of SPECA Ambassadors took place in the Turkmenistan Hall of the UN Geneva office on Wednesday to discuss the outcomes of the "SPECA Days" of the UN Special Program for the Economies of Central Asia (SPECA), which took place on November 18-21 this year in Ashgabat.

Executive Secretary of the United Nations Economic Commission for Europe (UNECE) Olga Algayerova, Representative of the Visegrad Foundation, Ambassadors and diplomats of SPECA countries, representatives and experts of the UNECE attended the event.

Representatives of SPECA countries advocated for improving the activities of the UN Special Program for the Economies of Central Asia (SPECA) and for the possibility of creating the SPECA Fund.

During the meeting, the Turkmen side announced the upcoming events in 2020 in the country, particularly the holding of the International Conference of Ministers of Transport of Landlocked Developing Countries.

At the end of the meeting, its participants expressed their views on the continuation of activities to improve cross-border cooperation in order to achieve high performance in the SPECA regional partnership, particularly the integration into the global economy and the implementation of the Sustainable Development Goals.

UN Special Programme for the Economies of Central Asia (SPECA) was launched in 1998 to strengthen subregional cooperation in Central Asia and its integration into the world economy. The countries of SPECA are Afghanistan, Azerbaijan, Kazakhstan, Kyrgyzstan, Tajikistan, Turkmenistan and Uzbekistan.