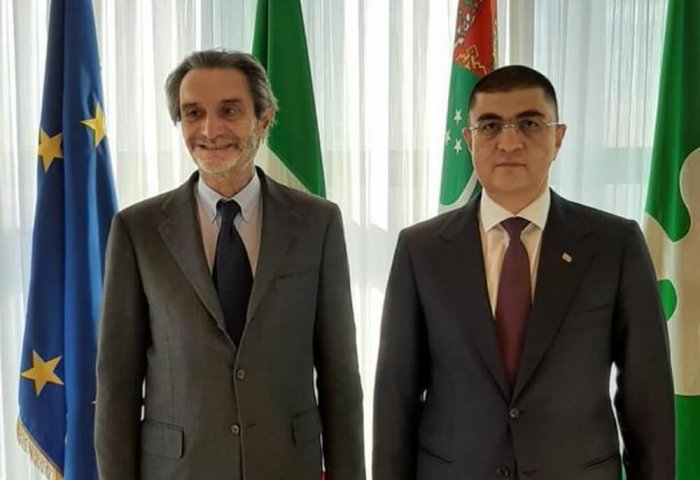 Ambassador of Turkmenistan to Italy Toily Komekov on Thursday held a meeting with Lombardy Governor Attilio Fontana at the Palazzo Lombardia, the main seat of the Lombardy regional government, in Milan.

The agenda of the talks included discussions on the prospects of cooperation between the business circles of regions of the two countries. Toily Komekov and Attilio Fontana also exchanged views on opportunities for participation of the leading companies of Lombardy in projects that involve the transfer of experience and modern technologies in the industrial, textile and agricultural processing industries.

In the course of the meeting, the sides noted the high level of Turkmen-Italian cooperation in political-diplomatic, trade-economic, cultural-humanitarian spheres, and expressed mutual interest in promoting cooperation between Lombardy and the regions of Turkmenistan and Ashgabat.

The officials additionally considered measures to develop scientific and educational ties. Training of highly qualified technical specialists and engineers from Turkmenistan at higher educational institutions of the Lombardy region was outlined among the promising direction of inter-regional cooperation in this area.

Today, Lombardy is the most populous and most productive region in Italy. The region accounts for around one-sixth of Italy's population, and more than a fifth of Italy's GDP. Lombardy region’s capital is Milan, the wealthiest city in Italy in terms of GDP.