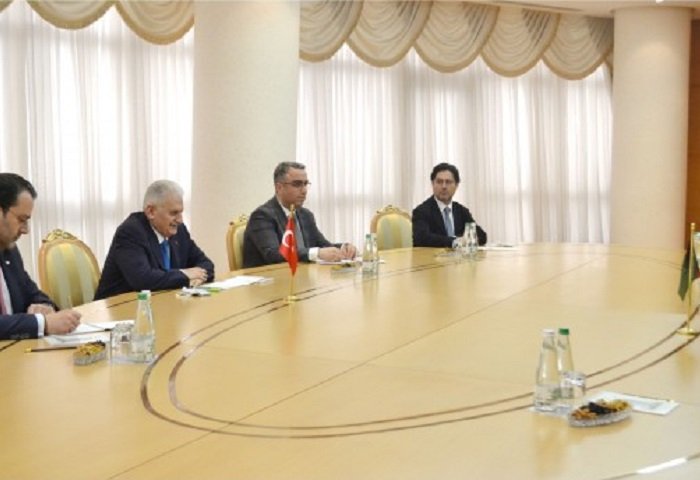 The Chairman of the Council of Elders of the Organization of Turkic States Binali Yildirim wished that the March 12 presidential elections would bring benefit to Turkmenistan and the Turkmen people.

President of Turkmenistan Gurbanguly Berdimuhamedov on Thursday received the Chairman of the Council of Elders of the Organization of Turkic States (OTS) Binali Yildirim at the building of the Administration of the Halk Maslahaty.

Thanking for the time devoted to the meeting, Binali Yildirim conveyed warm greetings from President of Turkey Recep Tayyip Erdogan to the Turkmen Leader, the official Turkmen media reports.

President Gurbanguly Berdimuhamedov conveyed his best wishes to his Turkish counterpart and stated that the comprehensive development and strengthening of bilateral and multilateral cooperation with the Turkic states occupies an important place in the foreign policy strategy of Turkmenistan. In this context, special importance is attached to productive interaction within the framework of authoritative international and regional structures, including the Organization of Turkic States, to which Turkmenistan joined as an observer in November last year.

Binali Yildirim said Turkey highly appreciates and supports the multifaceted activities of President Gurbanguly Berdimuhamedov and the large-scale reforms he is carrying out, which have radically changed the lives of the people of Turkmenistan and given a powerful impetus to the socio-economic development of the country, the growth of Turkmenistan’s authority in the international arena. Yildirim also wished that the March 12 presidential elections would bring benefit to Turkmenistan and the Turkmen people.

Within the framework of his visit, Binali Yildirim also met with the Turkmen Foreign Minister Rashid Meredov. The parties paid special attention to the issues of interaction with the observer mission of the Organization of Turkic States, which will take part in the preparation and conduct of the presidential elections in Turkmenistan.

Meredov and Yildirim, emphasizing the special significance of the customs and traditions of the Turkic peoples, noted that the activities of the Council of Elders of the Organization of Turkic States are aimed at preserving and comprehensively developing common cultural values, educating young people respect for common history.