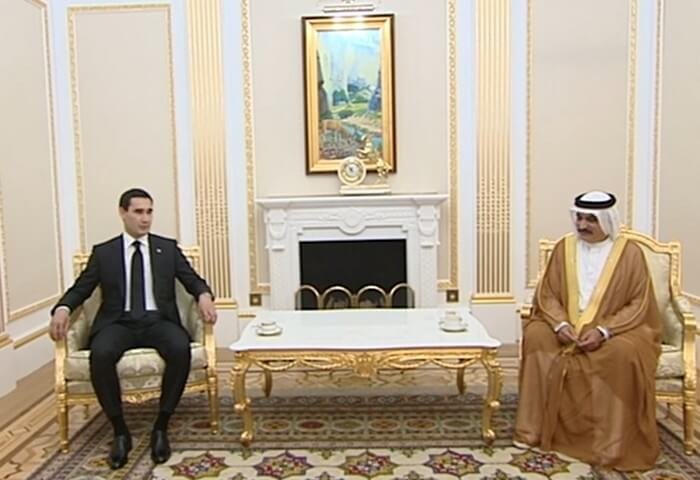 In meetings, President Berdimuhamedov emphasized that Turkmenistan is always open to mutually beneficial partnership with leading foreign companies, according to the official Turkmen media.

During a meeting with Martin Bouygues, the Chairman of French construction conglomerate Bouygues Group, the Turkmen President said Bouygues has proven itself with high quality of the implemented projects, timely and responsible fulfillment of its obligations.

The businessman, in turn, confirmed Bouygues' interest in further strengthening its position in the promising Turkmen market, where the company was one of the first to operate at the dawn of independence.

The talks between the Head of Turkmenistan and the head of the French company VINCI Construction Grands Projets Patrick Kadri focused on the prospects for expanding business contacts.

Patrick Kadri reaffirmed the willingness of the company he heads to take a very active part in implementation of new large-scale infrastructure projects initiated by the President of Turkmenistan on a long-term basis.

President Berdimuhamedov stated that Turkmenistan is open for further cooperation with French specialists - architects and designers, and intends to develop productive relationships with leading construction companies such as VINCI, expressing the readiness of the Turkmen side to consider specific proposals for new promising projects.

The Turkmen President and the Chairman of the French construction firm Cifal Gilles Remy exchanged views on prospects for further interaction in the context of comprehensive programs in different sectors of the economy of Turkmenistan. The fuel-energy complex and communications sphere were singled out as important areas of cooperation.

Stressing Cifal's interest in participating in the implementation of new joint projects, Gilles Remy assured that the company he heads would continue to strictly comply with the partnership obligations.

Given the growing global energy demand, President Serdar Berdimuhamedov emphasized that there are good prospects for further deepening of cooperation and that the Turkmen side is ready to consider all the company's proposals for further partnership.

Dragon Oil is the operator of the Cheleken Contract Area under a PSA, which was signed in November 1999 with Turkmen Government. The company started its operations in Turkmenistan in 2000. The oil company has extended the PSA with the state-owned company Türkmennebit (Turkmen Oil) until 2035.